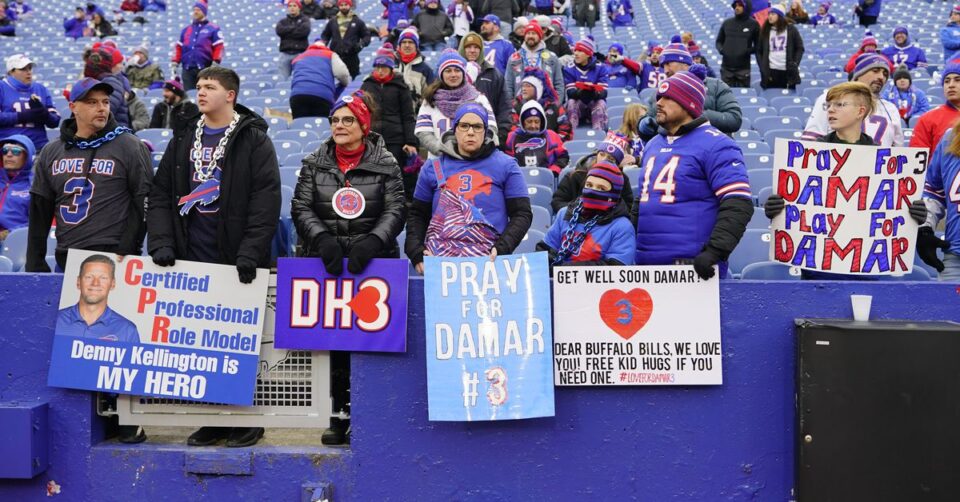 You could not write a better script than this.

The NFL world knew that it would be an emotional atmosphere at Highmark Stadium on Sunday. In their first game back since teammate Damar Hamlin went into cardiac arrest against the Cincinnati Bengals, the Buffalo Bills took the field for their final regular season game of the 2022 campaign.

Week 18 has included numerous tributes to Hamlin from around the NFL, as teams have met at midfield to pray before games, and players have worn shorts in Hamlins honor. Tributes have also poured in for the medical staff at University of Cincinnati Medical. Center, as well as the medical personnel who responded to his medical emergency last Monday night. Prior to Sunday’s game against the New England Patriots, the Bills recognized the medical staff that responded to Hamlin at the time of his cardiac event:

With Hamlin watching from his hospital room, the Patriots kicked off to start the game. And nothing, absolutely nothing, could have prepared the Bills or their fans for what happened next:

As Jim Nantz exclaimed: “This is storybook.” Nyheim Hines returns the opening kickoff for a touchdown, sending the Bills sideline, Highmark Stadium, and perhaps the entire football world into an absolute frenzy.

This replay angle provides another view of Hines’s incredible return:

And from a hospital room in Cincinnati, Hamlin as well was stunned:

After a long and trying week for the Bills — and another difficult event in what has been a tough year for the Buffalo community — this moment was, as Nantz himself said, storybook.

Hynes, however, was not done. After the Patriots kicked a field goal to take a 17-14 lead in the second half, he decided to take matters into his own hands.

With his second kickoff return for a touchdown on Sunday, Hines became the first player since Leon Washington back in 2010 with a pair of kickoff-return touchdowns a single game.