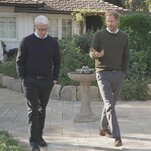 The death of his mother, Diana. His decades chafing under the eye of the British press. His marriage to Meghan Markle and his rift with the royal family. His drug use, his years in the Army, even his decision to keep his beard: In the first interviews about his memoir, “Spare,” Prince Harry appeared confident defending his perspective, even under tough questioning.

After 38 years of having his story told by other people, “it felt like a good time to tell it myself,” Harry said of the book, which Random House will publish on Tuesday.

The interviews, which aired on the British network ITV and on the CBS program “60 Minutes,” weren’t the first time Harry has spoken publicly about the relentless glare of scrutiny on his family and its toll, but they were the first time he did so without his wife, Meghan, the Duchess of Sussex, by his side. The two covered similar ground, with a few exceptions.

In his first interview for American audiences, Harry told Anderson Cooper that “Spare” gives “a full picture of the situation as we were growing up, and also squashes this idea that somehow my wife was the one that destroyed the relationship between these two brothers.”

Harry described what happened in September after the palace announced that his grandmother, the queen, was under medical supervision at Balmoral Castle, in Scotland. He was in London, but wasn’t invited to join family members who flew there together. He traveled to Balmoral by himself; when he arrived, his aunt asked if he wanted to see his grandmother, who had died.

“I went upstairs,” he said, “and just spent some time with her alone.”

Cooper asked Harry about the treatments he tried after seeing a therapist for the first time seven years ago, including the use of psychedelics.

“I would never recommend people to do this recreationally,” Harry said. But he said, “But doing it with the right people if you are suffering from a huge amount of loss, grief or trauma, then these things have a way of working as a medicine.”

He added: “For me, they cleared the windscreen, the windshield, the misery of loss.”

The interviewer for the 90-minute ITV interview was Tom Bradby, who, in 2019, famously asked Meghan a straightforward question: Are you OK? She was not. The pained look on the Duchess’s face foreshadowed a drumbeat of revelations about royal life that has sounded steadily over the past three years, including an explosive interview with Oprah Winfrey.

Harry and Bradby appeared in a sunny room with yellow brocade curtains. The vibe was more cozy living room than formal drawing room; the conversation was wide-ranging and occasionally contentious. When Harry’s face reddened and his eyes hinted at tears, he still projected an air of composure.

Harry quickly shut down the topic of how and where he lost his virginity, which he said only merits four lines in the book. Bradby suggested that Harry’s use of cocaine would be of interest to the public, but Harry shifted the focus back to his treatment at the hands of the press.

“My life itself has been put through a blender,” he said.

The media was a recurring theme throughout the interview; every time a new subject came up, Harry found a way to return to his favorite punching bag.

One unexpected disclosure had to do with Harry’s beard, which is now a part of his identity. According to protocol, the prince needed his grandmother’s approval to keep the facial hair for his wedding. Queen Elizabeth was amenable, but his brother William was not; he ordered Harry to shave. Harry’s response: “I don’t believe that Meghan is going to recognize me.”

When Bradby asked Harry about William’s feelings toward Meghan, Harry said, “He never tried to dissuade me from marrying Meghan,” but “he said it was going to be very hard.”

The behavior of his brother and sister-in-law toward Meghan, Harry said, left him feeling like “stereotyping was causing a bit of a barrier to them really sort of, you know, introducing or welcoming her in.”

Bradby said, “You talk about accountability. In the Oprah interview you accused members of your family of racism.”

“No I didn’t,” Harry said. “The British press said that.”

What the royal family is guilty of, Harry said, was institutional bias. Later, he illustrated the point by describing what happened when Susan Hussey — one of Queen Elizabeth’s longtime ladies-in-waiting — buttonholed a guest at a palace reception, Ngozi Fulani, and quizzed her about where she was from, not accepting that she was British.

Afterward, Hussey met with Fulani in Buckingham Palace and offered her apologies.

Harry said that Hussey “never meant any harm at all, but the response from the British press, and from people online because of the stories that they wrote, was horrendous.”

In the most poignant moments of the discussion, Harry described his decision, years after his mother died, to look at pictures taken after her car crash in Paris. In the photographs, he could see reflections of paparazzi in the windows of the car: “Not one of them was checking on her, offering her help, comforting her. They were just shooting, shooting, shooting.”

Bradby pressed Harry on the question of how he squares his desire for privacy with his public retellings of his story. Harry said that he feels his recent Nexflix documentary series and the book are “necessary and essential.”

He was sorry that “me owning my story” was upsetting to some, he said. But he still believed a reconciliation with the House of Windsor was possible, he said, adding, “Peace can happen when there’s truth.”