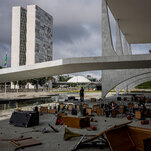 The riots in Brazil on Sunday had echoes of the Jan. 6 attack: Protesters stormed government buildings in the capital. Outnumbered police officers fired what appeared to be pepper spray and tear-gas canisters. The demonstrators persisted for hours, lashing out at what they falsely claim was a stolen election.

The comparison is inevitable, and it’s useful in some ways to make sense of what has happened in the Western Hemisphere’s two most populous democracies. But there are major differences between the Jan. 6 attack and Brazil’s riots. In today’s newsletter, I want to help you understand both the similarities and the differences.

The resemblance between the Jan. 6 attack and the Brazil riots is clear: In both, a right-wing leader — Donald Trump in the U.S., Jair Bolsonaro in Brazil — suggested for months that if they lost a coming election, it would be rigged. Then, when they lost, their supporters embraced the claims, using violence to try to overturn the voting results.

“Without question, Bolsonaro looms over it all,” said my colleague Jack Nicas, the Brazil bureau chief for The Times. “It is similar to what Trump did in some ways.”

The events also demonstrate the fragility of democracy. As I’ve written in this newsletter before, the world has been in a democratic recession for years: The share of the world’s population living in truly free democracies has declined. The Jan. 6 and Brazil riots fit into that broader trend.

Still, there are major contrasts between Brazil’s riots and the Jan. 6 attack. Unlike Trump, Bolsonaro largely abandoned his claims of fraud after he lost a runoff election; he allowed a peaceful transition to the presidency of Luiz Inácio Lula da Silva, who was inaugurated on Jan. 1. Bolsonaro has also criticized violence, condemning the riots and describing a recent foiled bomb plot by one of his supporters as a “terrorist act.”

Unlike American lawmakers on Jan. 6, Brazil’s Congress was not in session during the riots on Sunday. So in contrast to the Trump supporters who had sought to disrupt Congress’s certification of President Biden’s election, the Brazilians destroyed and looted mostly empty buildings, with no official process to interfere with.

“It was an expression of frustration and outrage,” said Jennifer McCoy, a political scientist at Georgia State University. “But without the possibility of stopping anything, because the inauguration already happened.”

So why did Bolsonaro back off his claims of election fraud? He may have realized that he lacked the institutional support to pull off a coup. The Brazilian military has resisted his supporters’ demands that it intervene in his favor. The army even helped clear the rioters.

Another possible explanation: Although Bolsonaro lost, his party won seats in the legislature. That gives Bolsonaro, whose three sons are also elected officials, a personal reason to not cast doubts on the election results.

It also makes the election fraud claims harder to buy. Why would Bolsonaro’s opponents rig the election for president but not do the same for the legislature? A similar question could be raised for the 2020 U.S. elections, when Democrats won the presidency but lost seats in the House and only barely clinched the Senate with later runoff elections.

As was true in the immediate aftermath of the Jan. 6 riot, it’s unclear what happens next in Brazil.

Brazilian authorities have moved to clear protesters, including at a tent city, in Brasília. More than 1,200 people were detained for questioning, a police spokesman said yesterday, as officials investigate how security forces failed to protect the government.

But such inquiries could lead to further backlash if Bolsonaro supporters come to see the government as conspiring against them. A Supreme Court judge suspended Ibaneis Rocha, the governor of the Federal District (where the capital of Brasília is), while investigations into security failures continue. That act — the suspension of a democratically elected leader by an unelected official — immediately prompted more questions about the functioning of Brazil’s democracy.

The uncertainty gets to one of the biggest differences between the Jan. 6 attack and the weekend riots: Brazil’s 38-year-old democracy is much younger and less established than America’s. It has dealt with serious corruption scandals, including one that temporarily landed Lula, who also previously served as president, in prison. With such a shaky foundation, Brazil is potentially more vulnerable to antidemocratic forces.

There is no perfect romantic partner, which makes finding “the one” a damaging myth, Dan Savage says on “The Ezra Klein Show.”

Kathi Wolfe is legally blind. Movies taught her how to use her limited vision, she writes.

A small group of lawmakers could use the Freedom Caucus’s tactics to decentralize power in the House, and that could be a good thing, Yuval Levin writes.

Rome: This skatepark has an incredible view.

New neighbor: They found a black bear hibernating under their deck — and decided it could stay.

Advice from Wirecutter: Use AirTags to track your luggage.

Lives Lived: Bernard Kalb reported on wars and revolutions. He also had a brief and unhappy tenure as a State Department spokesman. He died at 100.

SPORTS NEWS FROM THE ATHLETIC

National championship: Georgia earned its second straight national title — and a lofty spot in college football history — with a 65-7 win over T.C.U.

Durant out at least two weeks: The Nets said that Kevin Durant had sprained his M.C.L. and would be re-evaluated in two weeks, a setback for a team that has won 18 of its last 20 games.

Though Noma, the Copenhagen restaurant often called the best in the world, will close for regular service, its influence will live on through its imitators, the Times restaurant critic Pete Wells writes.

Noma’s innovations included its methods of foraging and fermenting, its rustic hand-thrown pottery and its list of odd-smelling natural wines. “I don’t think any restaurant came up with so many ideas that were shoplifted by so many other places in so many other cities quite so quickly,” he writes.

Still, a long-awaited lunch at Noma convinced Pete that the copycats could never fully capture the original: “The restaurant that had inspired so many imitators was fluid, it was graceful, it was coherent.”

What Is a Dynamic Warm-Up and What Exercises Should It Include?