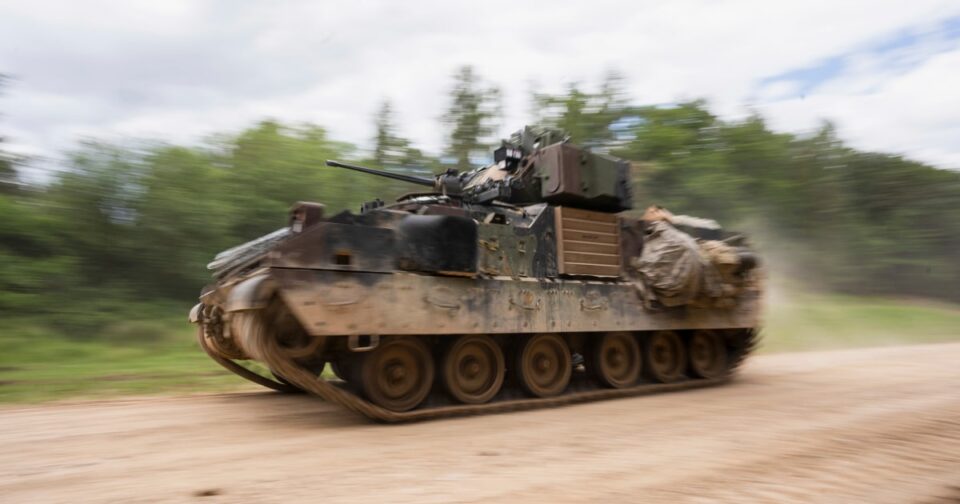 Military Twitter has been ablaze for days debating whether the armed and armored vehicles the U.S. and its allies recently decided to send Ukraine constitute tanks, which could be read as a significant escalation in the war against Russia. The debate centers on the precise form and function of the new fighting vehicles — but it misses the point.

It’s true that neither the American-made Bradley nor the AMX-10RC and Marder vehicles being chipped in by France and Germany, respectively, fit the technical definition of a tank, which is generally defined as combining a tracked hull with a turret containing a large howitzer-caliber gun. (The guns on the Bradley and Marder are smaller-caliber, while the AMX is wheeled rather than tracked.) But much more significantly, they provide the kind of armored maneuver capabilities that are required for pushing the Russians out of Ukraine.

Until recently, NATO states had been reluctant to give Ukraine their domestically designed heavy armored fighting vehicles due to a perception that they’re offensive weapons of aggression that Russia could jump on to broaden the scope of the war. But deadlier and more technically advanced weapons like HIMARS rocket artillery and PzH-2000 armored howitzers have already been transferred to Ukraine without triggering the Russian blowback many in the West feared.

Now the war is about to enter its second year. Through last summer the focus was on helping Ukraine defend against Russian advances, which it’s done admirably. But to end the conflict, Ukraine needs to go fully on the offensive to drive Russia out.

Kyiv has already won some offensive victories. Last fall, it successfully liberated Kharkiv and much of Kherson province — campaigns made possible due to Western donations of artillery, ammunition and transport vehicles. But now, future Ukrainian offensives will prove more challenging as Russia has fallen back to more defensible positions and recruited fresh troops. Though the new soldiers are very poorly trained and equipped, the mass conscription means the Russian forces aren’t as acutely undermanned as they were last year.

In an earlier phase of the war, I argued that heavy armored vehicles from the West weren’t the most efficient form of assistance to Ukraine due to the complexity of introducing such logistically demanding and expensive systems into service compared to the familiar former Soviet vehicles and cost-effective artillery and portable missile weapons donated for Ukraine’s then-defensive war.

But Ukraine’s armed forces now have a clear track record of successfully and rapidly integrating technically advanced weapons even with serious logistical challenges. And despite the downsides of providing these more sophisticated vehicles, armored vehicles can help capture ground whereas artillery, even if more lethal and at least as important, by itself can’t.

Artillery can inflict massive destruction from a distance, and it can do so relatively continuously. But somebody needs to fight their way to defensive positions and population centers held by enemy forces to flush them out. Ideally, this is done by a combination of armored vehicles and infantry; the former provide the firepower and mobility, and the latter dismount from vehicles like the Bradley to locate the enemy in constricted terrain and set up defensive positions in trenches, forests and buildings once the area is secured.

However, because Ukraine doesn’t have enough of the Soviet-designed BMP infantry fighting vehicles, similar in concept to the Bradley and Marder, its infantry is often recorded charging into battle in lightly armored Humvee trucks and other vehicles never intended to spearhead attacks against large conventional militaries.

Even if not tanks themselves, the Bradley and Marder weigh nearly twice as much as Ukraine’s BMP vehicles, due in part to heavier armor, which greatly improves the vehicle and passengers’ odds of surviving enemy fire. And unlike most of the Soviet BMPs, the Bradley, AMX-10RC and Marder have sophisticated thermal sights that will make them more likely to detect and destroy enemy forces, especially at night.

Of course, these vehicles can still be disabled by weapons designed to kill heavy tanks.  But their better sensors, armor and weapons mean they can be used much more aggressively to attempt to break through enemy lines and liberate territory.

Importantly, the Bradley and Marder’s troop-carrying capability means that whenever the terrain gets dense (like in forests or urban areas), putting the valuable tanks at risk of deadly ambushes, infantry can jump out and  flush out enemies concealed in buildings, trenches or dense forests — with covering fire from the fighting vehicles bristling with small but rapid-firing cannons and anti-tank missiles. Once the obstacles are cleared, the dismounted infantry can effectively defend a captured position against counter attacks, or quickly jump back in their fighting vehicles and resume the advance without getting pinned down by minor harassing fire.

It’s also worth pointing out to critics of assistance to Ukraine that these vehicles are being supplied at almost no cost, as the U.S. has over 2,000 Bradleys in storage, while Germany and France are in the process of replacing their armed forces’s remaining Marders and AMX-10RCs in favor of newer designs.

To be sure, there will certainly be costs in helping Ukraine train for, supply and maintain these new, heavier vehicles. And some have bemoaned that the 90 Bradley and Marders are only enough to equip a single mechanized brigade — while Ukraine regular army began the war with 38 infantry and armored brigades.

However, given the numerous remaining Bradleys in storage and France and Germany’s gradual replacement of the AMX-10RC and Marder underway, it seems very likely more will be delivered. The initial announced batch is likely a seed around which Ukraine can prepare training and logistics systems for future deliveries.

Some speculate these vehicles may soon be followed by transfers of heavy tanks. After all, the U.S. also has 3,700 Abrams tanks gathering dust in storage, though the logistical challenges of refurbishing, transferring and integrating the 70-ton tanks remain even greater, particularly due to its high fuel consumption.

It’s important to remain realistic; nothing is guaranteed in war. Nonetheless, supplying new, tougher armored vehicles will improve Ukraine’s ability to liberate territory. That’s bad news for Putin as he seeks to hold onto as much of Ukraine as possible, hoping to drag hostilities out and convince Kyiv’s backers additional aid is pointless. The sooner it becomes clear that approach won’t work, the shorter the duration of the war.