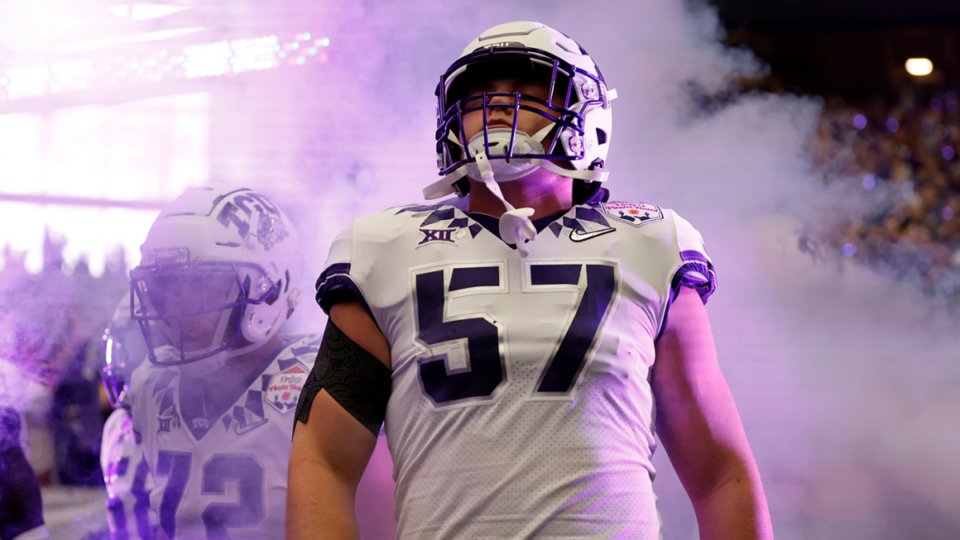 “We’re a team full of chips,” the TCU linebacker said.

In Hodges shorthand, that translates to chips on shoulders. A cliché, sure, but an entree into the heart of the No. 3 Horned Frogs. They weren’t meant to be here in the College Football Playoff National Championship.

In fact, the last team in a similar position was BYU in 1984. Those Cougars are the most recent national champions coming from outside the current Power Five.

TCU as a member of the Big 12 is clearly a Power Five team these days, but it’s been a league-hopper over the last quarter century. When its ancestral Southwestern Conference broke up, TCU was passed over for Big 12 membership. From there followed a purgatory of stops in the WAC, Conference USA and Mountain West.

The desperate, little purple engine that could finally achieved its power conference brass ring when the Big 12 opened its doors to TCU in 2012.

There’s a reason why No. 1 Georgia is favored by almost two touchdowns, the largest line in CFP National Championship history. TCU is a long shot. If the Frogs win, they would defeat perhaps the best program in the sport. If the Bulldogs don’t already hold that mantle, Monday night could go a long way to building that narrative.

TCU is just trying to hang on, if you believe recruiting rankings. The Frogs have 17 blue-chip recruits on their roster, four of whom are transfers. The Dawgs have four times as many.

“You can’t overstate what they’ve done,” said former Texas A&M coach R.C. Slocum, a College Football Hall of Fame member, of TCU. “They just stay after you. They’re not an ebb and flow type of team. They just stay the same all the time whether it’s going well or not. It’s hard to beat a team that won’t be beat.”

Big 12 commissioner Brett Yormark was skipping around Saturday at the CFP National Championship media day like his conference had already won. Yormark has already stated his intent of expanding the Big 12 out to the Pacific Time Zone. With USC and UCLA leaving for the Big Ten, TCU and Big 12 entered the L.A. market this week.

There is a niche community about 27 miles North of SoFi Stadium, the site of Monday’s game, called Frogtown. It is not a city unto itself but — as its website proclaims — “a progressive, pocket community … where socially conscious hipsters and multi-generation families cohabitate and call home.”

Frogtown is also the site of a Big 12 takeover this weekend. Really, that’s what they’re calling it: a “takeover.”  There’s purple beer in the Frogtown brewery. There will be 200 free Frogtown tacos available at the Santa Monica Pier on Sunday.

What’s this got to do with beating Georgia? You’re missing the point. Yormark is trying to take over the world, and the Frogs are his invading army.

“Think about where this conference was six months ago, 12 months ago, 18 months ago,” Yormark told CBS Sports. “It’s been a transformative moment. Obviously, this is a big validation.

“It also validates the composition and makeup of our conference. I’m sure there are people who were worried. What’s going to happen with Texas and Oklahoma out? No one is talking about that anymore.”

No, they’re not. This game may define the hopes and dreams of similar hopefuls once the CFP expands in 2024.

Slocum coached against TCU in the SWC multiple times during his career. He was also close friends with former Texas Tech coach Spike Dykes, father of current TCU coach Sonny Dykes. They were so close Sonny recalled coming home from high school baseball practice in West Texas seeing his father and Slocum enjoying an adult beverage in the afternoon.

Slocum has watched Sonny, who entered 2022 with only five winning seasons in 12 as a head coach, unlock greatness. Dykes has taken a roster assembled by former coach Gary Patterson to the brink of a championship.

What would it mean for TCU, the Big 12 and college football if TCU actually wins it all?

Las Vegas answered part of that question earlier this month when TCU was installed with the longest odds (16-1) to win the championship when the bracket debuted, according to Caesars Sportsbook. Those who had the foresight to bet $100 on the Frogs would cash $1,600 if TCU wins Monday night.

“It makes the statement again that no one has a lock on winning,” Slocum said. “Just because you have good players doesn’t mean you’re going to win. The challenge is to get those guys all together, all playing for each other. That gives encourage to a lot of schools out there that may not be at the top. It gives them hope.”

It would mean a lot of chips would be cashed. Hodges is one of 14 TCU transfers. Frustrated with himself and Navy, he was looking for a new home after last season. His dad took on the task of emailing each of the other 131 FBS programs. There were no takers.

TCU defensive coordinator Joe Gillespie took notice because he had played against Navy while at Tulsa prior to being hired by Dykes. Hodges’ addition turned the defense into an opportunistic unit. TCU was outgained by Michigan last week (528-488), but the difference in the game may have been two pick sixes.

“We have a lot of guys on this team who are three-stars, two-stars that didn’t have many offers coming out of high school, so I feel like everybody already had a chip on their shoulder coming in,” said cornerback Tre’Vious Hodges-Tomlinson.

“It’s time to start taking us very serious. We’re not a joke.”

Not when Hodges-Tomlinson, the nephew of TCU great LaDanian Tomlinson, is the reigning Jim Thorpe Award winner as the nation’s best defensive back. Not when quarterback Max Duggan is a former state high school 200-meter champion. (It surprised everyone from Oklahoma to Michigan when Duggan led all Big 12 quarterbacks in rushing.) Not when Hodges went from no takers to leading TCU in tackles.

“The media wants the bluebloods to win,” Hodges said following the Michigan game. “They want the bluebloods to play each other. The schools are bigger — bigger fan bases. That’s what they want. For us, [it’s] to put ourselves on the map, earn some money and put some respect on your family name.”

That’s what is motivating Emari Demercado. In his sixth season, he has wound his way back home. Out of high school, his only FBS offers were from Army and Navy. That led him to start at Saddleback College in Mission Viejo, California. Once at TCU, he played down on the depth chart for most of his career.

When leading rusher Zach Evans transferred to Ole Miss, Demercado backed up workhorse Kendre Miller. Suddenly, as a central figure in Monday’s game, Demercado can’t find enough tickets for his family and friends to watch him play for the national title.

Despite growing up in nearby Inglewood, 5 minutes from SoFi Stadium, he has never stepped foot in the venue.

Life was sparse, not glorious. In high school, Demercado lived with a friend’s family because practice at Downey High School began at 5 a.m. In L.A. where a huge city is connected by vast tracks of highways — and traffic — it made sense.

“My mom had bought me a little ’97 Lexus,” Demercado said. “It was just optimum for me to stay with them.”

Prior to the Fiesta Bowl semifinal, Michigan had given up one 100-yard rushing performance all season (Chase Brown, Illinois). Demercado rumbled for a career-high 150 yards in a backup role after Miller was injured.

Oh, and in that sixth year, Demercado was able to get his master’s in business analytics.

“I grew up here,” Demercado said. “I had my whole childhood here. I leave and go to Texas and be able to finish my college career here. It’s almost like it’s scripted.”