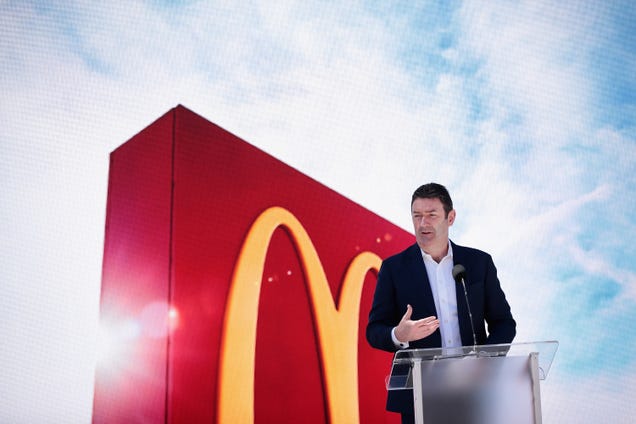 The Securities and Exchange Commission found that McDonald’s dismissal of its ex-CEO Stephen J. Easterbrook was not by the book—but only the former business executive is facing repercussions for the affair.

In 2019, McDonald’s abruptly fired Easterbrook, but key details leading to the decision were left out in the initial briefing to investors. The company ousted him for having a consensual relationship with a subordinate but did not say so in his separation agreement.

Since Eastbrook’s firing was initially deemed to be “without cause” he remained entitled to a cushy equity compensation. More than half a year after Easterbrook was ousted, an internal probe found that he had engaged in not one but a string of undisclosed, improper relationships with other McDonald’s employees. Easterbrook’s failure to disclose these additional violations of company policy—McDonald’s prohibits dating or sexual relationships between employees with a direct or indirect reporting relationship to each other—influenced the accuracy of the fast-food giant’s disclosures to investors related to his departure and severance package.

The SEC yesterday (Jan. 9) charged Easterbrook with “making false and misleading statements to investors” about the circumstances leading to his November 2019 firing. McDonald’s was also charged for holes in its public disclosures related to the termination.

Without admitting or denying the SEC’s acquisition of fraud, Easterbrook agreed to enter the SEC’s cease-and-desist order. He has to pay a $400,000 civil penalty, and he has been banned from serving in officer or director positions at any firm for five years.

“When corporate officers corrupt internal processes to manage their personal reputations or line their own pockets, they breach their fundamental duties to shareholders, who are entitled to transparency and fair dealing from executives. By allegedly concealing the extent of his misconduct during the company’s internal investigation, Easterbrook broke that trust with–and ultimately misled–shareholders.” —Gurbir S. Grewal, director of the SEC’s division of enforcement.

The money in Easterbrooks’s exit from McDonalds, by the digits

$41.8 million: Easterbrook’s severance package including six months of pay, shares he can cash out later, and other equity.

$23.8 million: Value of stock options he could exercise at the time of firing

$12.37: Average hourly pay for a McDonald’s crew worker in the US

$105 million: How much Easterbrook repaid, in cash and stock, in December 2021 to settle a lawsuit McDonald’s brought against him in August 2020, alleging he had inappropriate relationships with subordinates and covering it up.

Why is McDonald’s not being fined?

Often, in cases where executives violate its anti-fraud rules, the company is fined, too. To name a few:

✈️ Last September, the SEC levied penalties of $200 million and $1 million on Boeing and then-CEO Muilenburg, respectively, for sharing misleading information about the Boeing 737 Max which was involved in some deadly crashes;

🦠 In May 2022, the federal authority charged New York-based SCWorx upwards of $600,000 in penalties and disgorgement, and sought an officer and director bar against Schessel, for lying about the planned distribution of their covid-19 rapid testing kits;

💰 Publicly-traded asset manager Medley Management and its former co-CEOs, Brook B. Taube and Seth B. Taube, were together told to pay a total of $10 million in April 2022 after the SEC accused them of “making misrepresentations to investors and clients that created the illusion of Medley’s likely future growth.”

In McDonald’s case, though, the key difference is that the misrepresentation wasn’t about the business itself. And for some of the incidents, it could not disclose Easterbrook’s consensual relationships with subordinates because the company itself was not aware of them. Plus, it tried to remedy the situation.

“We fired him, and then sued him upon learning that he lied about his behavior,” the company said in a statement.

Taking all this into consideration, and then the “the substantial cooperation it provided…including voluntarily providing information not otherwise required to be produced in response to the staff’s requests,” the SEC rebuked McDonald’s, but chose not to impose a financial penalty on the fast food chain.