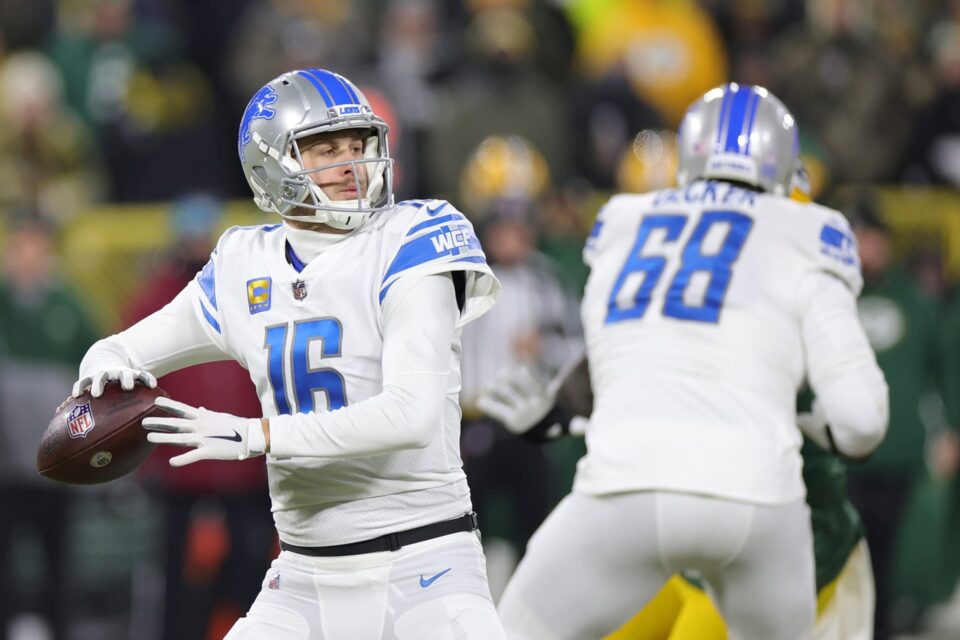 GREEN BAY, WISCONSIN – JANUARY 08: Jared Goff #16 of the Detroit Lions drops back to pass during a game against the Green Bay Packers at Lambeau Field on January 08, 2023 in Green Bay, Wisconsin. The Lions defeated the Packers 20-16. (Photo by Stacy Revere/Getty Images)

Lions general manager Brad Holmes was asked about the team’s future at QB and Jared Goff. He delivered a strong statement that offers some clarity.

Even if the Detroit Lions just missed out on the playoffs, it’s hard not to be impressed with the culture that head coach Dan Campbell and general manager Brad Holmes have built in the Motor City.

The team turned around a poor showing in the 2021 season to be alive for the postseason until the last game of the year — and they still fought hard after being eliminated to upend the Packers, knocking their rivals out of the playoffs and finishing with a winning 9-8 record. Things are looking up for the Lions.

As the arrow is pointing up, though, the question has started to arise about what Detroit should do at quarterback. Jared Goff has started the past two seasons after arriving in the Matthew Stafford trade from the Rams, but now the Lions own the No. 6 (from LA in that trade) and 18 picks in the 2023 NFL Draft. If there was a time to make a move on a QB in the draft, it could be now.

But that doesn’t seem to be what Brad Holmes is planning, at least not in a way that would pull the rug from under Goff.

Lions GM Brad Holmes says Jared Goff has proven he’s the starting QB in DetroitSpeaking with the media, Holmes wasn’t completely direct in saying that Jared Goff would be the starter in Detroit for the 2023 season, his statement on the matter did just about everything but say that outright.

“I’ll say this, I think it’s a lot easier to get worse at quarterback than to get better at quarterback in this league,” Holmes said, via The Detroit News. “I think what Jared has done this year, he captained the ship of a top-3 offense, and I want to say he was top-10 statistically in most of the passing categories. Again, you know how we approach the draft, we’re never going to turn down a good football player. If there’s a good football player that we really love, we’re going to make sure every stone is (overturned). But I do think Jared has proven to everybody that he is a starting quarterback for us.”

That seems like an endorsement for moving forward with Goff more than anything else.

Now, that doesn’t preclude the Lions from taking a quarterback in the 2023 draft, even if the plan is to keep Goff installed as the starter. That could mean standing pat with their current picks and selecting a project quarterback such as Anthony Richardson or Will Levis who could use time to develop behind someone like Goff.

At the same time, though, Goff was impressive this season in the Detroit offense, particularly as the team went 7-2 in their final nine games and as the quarterback lit it up.

It’s a long offseason ahead, but Jared Goff proved a lot of doubters wrong with his play in the 2023 season, particularly in the second half of the year. More importantly, though, it seems his performance made a believer out of Brad Holmes and could make him the QB of, at the very least, the now for the Lions.