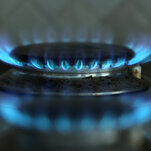 WASHINGTON — Concerns raised by the nation’s top consumer watchdog about the health hazards posed by gas stoves have triggered a sharp rebuke from the oil and gas industry and its Republican allies, inserting a common kitchen appliance into the middle of partisan politics.

Critics were pushing back hard on Wednesday against recent comments made by Richard Trumka Jr., a commissioner of the United States Consumer Product Safety Commission, that his agency might take some regulatory action in the face of growing research that links gas stoves to pollutants that harm both human health and the environment.

“This is a hidden hazard,” Mr. Trumka said in an interview with Bloomberg on Monday. “Any option is on the table. Products that can’t be made safe can be banned.”

Those words were echoing around a Wednesday breakfast meeting of the American Petroleum Institute, where the oil and gas industry and its supporters in Congress had gathered to discuss the upcoming legislative agenda.

“Gas stoves are very important and we need to understand what’s being proposed and why,” said Representative Cathy McMorris Rodgers, a Washington Republican and the chairwoman of the House Committee on Energy and Commerce, who was at the breakfast.

Mr. Trumka had tried to quell the firestorm on Monday. “To be clear, C.P.S.C. isn’t coming for anyone’s gas stoves,” he wrote on Twitter, adding that any regulations would apply to new products.

Eight hot years. Scientists from the European Union’s Copernicus Climate Change Service reported that the last eight years were the warmest on record. Extreme summer temperatures in Europe, China and elsewhere contributed to 2022 being the fifth-hottest year on record; 2016 was the hottest year ever.

U.S. carbon emissions. America’s greenhouse gas emissions from energy and industry rose last year, moving the nation in the opposite direction from its climate goals, according to preliminary estimates by a nonpartisan research firm. Emissions ticked up 1.3 percent, even as renewables surpassed coal for energy generation nationwide for the first time in over six decades.

Parasitic populations According to a groundbreaking new study that analyzed 85 parasitic species, the majority of them suffered population declines over 140 years. The decline, seemingly driven by warming temperatures, suggests another unexpected way that climate change can harm ecosystems.

Ozone layer restoration. The weakened ozone layer, which is vital to protecting life on Earth, is on track to be restored to full strength within decades, according to a U.N.-backed assessment. In the report, scientists said that China had largely eliminated rogue emissions of chemicals that had been destroying the critical layer in the upper atmosphere.

Biodiversity agreement. Delegates from roughly 190 countries meeting in Canada approved a sweeping United Nations agreement to protect 30 percent of the planet’s land and oceans by 2030 and to take a slew of other measures against biodiversity loss. The agreement comes as biodiversity is declining worldwide at rates never seen before in human history.

At an October meeting of the commission, Mr. Trumka wanted the staff to begin writing rules regarding gas stoves but could not get support from the other four members. Instead, the commission agreed to obtain input from the public.

But Republicans remained outraged, with Ms. McMorris Rodgers promising to scrutinize the Consumer Product Safety Commission. “We will do oversight,” she said, adding that she questioned some of the newest research linking gas stoves to asthma.

At least one Democrat joined the fray. “This is a recipe for disaster,” Senator Joe Manchin III, Democrat of West Virginia, wrote on Twitter on Tuesday. “The federal government has no business telling American families how to cook their dinner. I can tell you the last thing that would ever leave my house is the gas stove that we cook on.”

Mike Sommers, the president of the American Petroleum Institute, said a ban on gas stoves was “not going to happen.” He predicted a backlash from homeowners across the country. Gas stoves are used in about 35 percent of households nationwide, or about 40 million homes.

A study published in December estimated that gas-burning stoves are responsible for 12.7 percent of childhood asthma in the United States. Gas stoves emit nitrogen dioxide, carbon monoxide and fine particulate matter when they are turned on, sometimes at levels that exceed guidelines from the Environmental Protection Agency and the World Health Organization. They also release other harmful air pollutants that are known or suspected to cause cancer, and can even leak those chemicals when they are turned off.

The debate over proposals to limit the use of gas in homes because of its impact on climate change and public health has grown since 2019, when Berkeley became the first city in the country to ban gas hookups in most new homes and buildings. Since then, dozens of cities in California and across the country have enacted similar ordinances that target not just gas stoves, but other appliances like gas-fired furnaces and water heaters.

On Tuesday, Gov. Kathy Hochul of New York proposed that the legislature phase out the sale of fossil fuel heating equipment in existing residential buildings beginning in 2030 and require new residential and commercial buildings be all-electric by 2025 and 2030, respectively.

When it comes to gas bans, Republicans have been the loudest critics and 20 Republican-controlled state legislatures have passed laws prohibiting such bans. But in most households in those red states cook with electric stoves, not gas, according to a 2020 analysis from the Energy Information Administration. States with the highest percentage of households that use gas for cooking are controlled by Democrats and include California, Nevada, Illinois, New York and New Jersey, according to the analysis.

A stream of Republican lawmakers attacked Mr. Trumka and the Biden administration on Twitter for even contemplating restrictions on gas stoves. “Unelected bureaucrats should not have the type of power to even consider such an action,” Representative Gary Palmer, Republican of Alabama, wrote. “It is time to rein in the Biden administration and their continual desire to control American’s lives and decisions.”

On his Fox News television show, Tucker Carlson featured a restaurateur who spoke about how his costs would go up and productivity go down by using electric stoves. “This will destroy our industry,” the restaurant owner, Stratis Morfogen, said.

The new climate law passed by Congress last year includes $4.5 billion for states to provide rebates to consumers for the purchase of electric appliances, including stoves.

The safety commission has not initiated any proceedings to ban gas stoves and is “not looking to ban gas stoves,” the agency’s chairman, Alexander Hoehn-Saric, said in a statement on Wednesday morning. In the spring, the commission will begin to seek public comment on gas stove hazards and potential solutions for reducing risks.

“Research indicates that emissions from gas stoves can be hazardous, and the C.P.S.C. is looking for ways to reduce related indoor air quality hazards,” he added.

Violent 6-year-olds can be healed