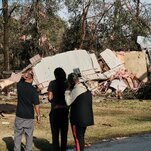 Storms caused damage in Alabama, Georgia and Mississippi, prompting a series of tornado watches that later expired. More than 50,000 customers had no electricity as of Friday morning.

OLD KINGSTON, Ala. — At least six people were killed on Thursday in Autauga County, Ala., the local sheriff’s office said, as storms and tornadoes left a trail of damage across the American South.

Tens of thousands of customers were still without power in parts of Alabama and Georgia in the predawn hours of Friday morning, as power crews worked through the night and early reports of injuries and damages began to surface.

Enrique Milian, who lives in Autauga County, said in an interview that several of his relatives, including two children, had been injured by an apparent tornado on Thursday as they left their mobile home and ran toward a family car.

The two children, his five-month-old and 1-year-old nephews, were hospitalized with chest injuries and are expected to survive, Mr. Milian said, standing near a dirt road where several mobile homes — including his own and those of his two brothers — had been destroyed.

Thunderstorms were forecast for parts of Central and South Florida on Friday, but there was no longer a threat of extreme weather across the South, Mr. Oravec said, adding that all the tornado watches issued earlier in the day had expired.

“A lot of the worst of the weather, it appears, is over,” he said.

More than 6.8 million people across Alabama and Georgia had been under a tornado watch on Thursday, and the governors of both states declared states of emergency.

“We are far too familiar with devastating weather, but our people are resilient,” Gov. Kay Ivey of Alabama said on Twitter.

Alabama’s order applied to six counties, including Autauga, which has a population of just under 60,000 people and lies in the Appalachian foothills. In 2011, it was struck by a punishing storm system that killed three people.

More than 24,000 customers in Alabama and more than 33,000 in Georgia were still without power as of early Friday morning in Atlanta, according to the tracking site poweroutage.us. It was unclear whether all those outages were the result of the severe weather.

In Autauga County, Gary Weaver, the deputy director of the Emergency Management Agency, said on Thursday that there were reports of injuries and damage, including felled power lines, throughout the county. Mr. Weaver said that his office had received reports of some injuries, but that it was not clear how many people had been hurt, or how badly.

Utility crews in the county were already working to repair damage on along the storm’s path. One from PowerSouth Energy Cooperative was dispatched on Thursday from Andalusia, Ala., to assess damage to downed power lines and a substation.

In Tallapoosa County, Ala., a trooper from the Alabama Law Enforcement Agency was taken to the hospital with injuries after a tree fell and hit his car, crushing it, according to images and a statement posted on Facebook Thursday.

Further west in Spalding County, Ga., the sheriff’s office reported that downed trees were blocking roadways, and announced that schools and the county courthouse would be closed on Friday.

The storms also left students trapped on Thursday at four Spalding County middle schools. Students from two of the schools later made it home safely, but officials were still working to help a total of 24 children leave the other two schools, the Griffin-Spalding County School System said on its website.

And in the county seat, Griffin, violent winds had torn apart buildings and felled trees, according to Jessica Diane Pitts, a resident. “You could hear stuff being ripped to pieces and people screaming in fear!” Ms. Pitts said in a Facebook message. “I hope I never experience something like this again!”

In Mississippi, the state’s emergency management agency shared a video on Twitter that showed a home in Monroe County that had been essentially flattened. Other houses nearby sustained roof damage, with debris littering the area.

“That home is completely destroyed,” Malary White, a spokeswoman for the agency, said on Thursday.

Several severe thunderstorm warnings were also issued in the Atlanta area, including one for the area around Hartsfield-Jackson Atlanta International Airport, where the Weather Service warned of winds up to 60 miles per hour, quarter-size hail and a possible tornado.

And in Selma, Ala., videos and images that circulated on social media on Thursday showed damaged buildings, fallen trees and vehicles with broken windows. The Weather Service office in nearby Birmingham, Ala., said on Twitter that there had been “confirmed damage” in Selma.

The Selma mayor’s office said in a statement that the city had “received significant damage from the tornado.” It urged residents to refrain from driving and to avoid downed power lines.

At a news conference on Thursday evening, officials in Selma said they had received no reports of fatalities, but that there had been some injuries. A curfew was to be put in place from dusk to dawn across the city.

A man in Selma, Bobby Green, told an ABC affiliate station that he had survived flying debris by sheltering in his car.

“I thought it was all over for me,” he said.

Counties shown are those with at least 1 percent of customers without power.
By The New York Times