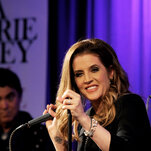 Celebrities expressed shock and heartbreak on social media over the death of Lisa Marie Presley, the singer-songwriter and only child of Elvis Presley.

“There is heartbreak and then there is sorrow. This would be sorrow and on more levels than I can count,” the Smashing Pumpkins singer Billy Corgan said late Thursday on Instagram, where he also shared a photograph of himself with Ms. Presley. “I truly cannot find the words to express how sad this truly is.”

“Lisa baby girl, I’m so sorry,” the actor John Travolta said on Instagram. “I’ll miss you but I know I’ll see you again.”

The songwriter Linda Thompson, who dated Elvis in the 1970s, also took to Instagram. “My heart is too heavy for words,” she said.

The fashion designer Donatella Versace said on Instagram that she would never forget the times they spent together, adding: “Your beauty and your kindness shone so bright.”

“So sad that we’ve lost another bright star in Lisa Marie Presley,” the actress Octavia Spencer said on Twitter. “My condolences to her loved ones and multitude of fans.”

The Twitter account of the Golden Globes awards said “We are incredibly saddened” by the news of her death. Ms. Presley’s last public appearance was on Tuesday at the awards ceremony to celebrate Austin Butler, who won Best Actor for the title role in the Baz Luhrmann biopic “Elvis.”

“Lisa Marie Presley … how heartbreaking,” singer LeAnn Rimes Cibrian said on Twitter. “I hope she is at peace in her dad’s arms.”

Some celebrities also remembered the difficulties that she had faced.

“Lisa did not have an easy life,” the actress Leah Remini said on Twitter, adding that she was heartbroken by the news. “May she be at peace, resting with her son and father now.”

Ms. Presley lost her father when she was 9. Married and divorced four times, she had also struggled with opioid addiction. Her son, Benjamin Keough, died by suicide in 2020. Less than six months before her own death, she wrote about grieving his loss.

Corey Feldman, an actor and singer, said that he had spent hours on the phone with Ms. Presley when she was divorcing the singer Michael Jackson. Benjamin Keough was “like a little brother” to him, Mr. Feldman said.

“So much loss, so much tragedy,” he said on Twitter, adding that “She was a beautiful, powerful woman” who wanted to “make her own rules.”

“A sweet and gentle soul,” the actor Cary Elwes said on Twitter. “We send our deepest, heartfelt condolences to Priscilla, Riley and her family and friends.”

Lisa Marie Presley, the Daughter of Elvis Presley, Dies at 54