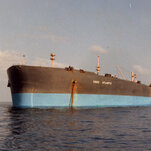 In the late 1970s, scientists at Exxon fitted one of the company’s supertankers with state-of-the-art equipment to measure carbon dioxide in the ocean and in the air, an early example of substantial research the oil giant conducted into the science of climate change.

A new study published Thursday in the journal Science found that over the next decades, Exxon’s scientists made remarkably accurate projections of just how much burning fossil fuels would warm the planet. Their projections were as accurate, and sometimes even more so, as those of independent academic and government models.

Yet for years, the oil giant publicly cast doubt on climate science, and cautioned against any drastic move away from burning fossil fuels, the main driver of climate change. Exxon also ran a public relations program — including ads that ran in The New York Times — emphasizing uncertainties in the scientific research on global warming.

Global warming projections “are based on completely unproven climate models, or, more often, on sheer speculation,” Lee Raymond, chief executive of the newly-merged ExxonMobil Corp, said at a company annual meeting in 1999. “We do not now have a sufficient scientific understanding of climate change to make reasonable predictions and/or justify drastic measures,” he wrote in a company brochure the following year.

In a statement Exxon did not address the new study directly but said “those who talk about how ‘Exxon Knew’ are wrong in their conclusions,” referring to a slogan by environmental activists who have accused the company of misleading the public about climate science.

“ExxonMobil has a culture of disciplined analysis, planning, accounting, and reporting,” the company added, quoting a judge in a favorable verdict in New York three years ago, albeit for a case that addressed the company’s accounting practices, not climate science.

Eight hot years. Scientists from the European Union’s Copernicus Climate Change Service reported that the last eight years were the warmest on record. Extreme summer temperatures in Europe, China and elsewhere contributed to 2022 being the fifth-hottest year on record; 2016 was the hottest year ever.

U.S. carbon emissions. America’s greenhouse gas emissions from energy and industry rose last year, moving the nation in the opposite direction from its climate goals, according to preliminary estimates by a nonpartisan research firm. Emissions ticked up 1.3 percent, even as renewables surpassed coal for energy generation nationwide for the first time in over six decades.

Parasitic populations According to a groundbreaking new study that analyzed 85 parasitic species, the majority of them suffered population declines over 140 years. The decline, seemingly driven by warming temperatures, suggests another unexpected way that climate change can harm ecosystems.

Ozone layer restoration. The weakened ozone layer, which is vital to protecting life on Earth, is on track to be restored to full strength within decades, according to a U.N.-backed assessment. In the report, scientists said that China had largely eliminated rogue emissions of chemicals that had been destroying the critical layer in the upper atmosphere.

Biodiversity agreement. Delegates from roughly 190 countries meeting in Canada approved a sweeping United Nations agreement to protect 30 percent of the planet’s land and oceans by 2030 and to take a slew of other measures against biodiversity loss. The agreement comes as biodiversity is declining worldwide at rates never seen before in human history.

The new study, from researchers at Harvard University and the Potsdam Institute for Climate Impact Research, builds on reporting showing that for decades, Exxon scientists had warned their executives of “potentially catastrophic” human-caused climate change.

The burning of oil, gas and coal is raising Earth’s temperature and sea levels with devastating consequences worldwide, including intensifying storms, worsening drought and deadlier wildfires.

Other fossil fuel companies, electric utilities, and automakers have come under fire for downplaying the threat of climate change, even as their own scientists warned of its dangers. In recent years, cities, counties and states have filed dozens of lawsuits accusing Exxon and other companies of public deception, and demanding billions of dollars in climate damages.

Last year, a House committee grilled oil chiefs, including current Exxon chief executive Darren Woods, on whether companies misled the public about the climate. Mr. Woods said the positions were “entirely consistent” with the scientific consensus of the time.

In the new study, Geoffrey Supran and Naomi Oreskes of Harvard, and Stefan Rahmstorf of the Potsdam Institute, carried out a quantitative analysis of global warming projections made or recorded by Exxon scientists between 1977 and 2003.

Those records, which include internal memos and peer-reviewed papers published with outside academic researchers, make up the largest public collection of global warming projections recorded by a single company, the authors said.

The company’s scientists, in fact, excluded the possibility that human-caused global warming was not occurring, the researchers found.

Exxon’s scientists also correctly rejected the possibility of a coming ice age, even as the company continued to refer to it in its public communications; accurately predicted when human-caused global warming would be first detected; and estimated how much carbon dioxide could be added to the atmosphere before warming hit a dangerous threshold, the study found. Some of the Exxon studies predicted an even sharper rise in temperatures than what the planet has experienced.

William D. Collins, who leads the Climate & Ecosystem Sciences Division at the Lawrence Berkeley National Laboratory and who was not involved with the new study, called its analysis “very sound.”

“This is first article that I’ve seen that is a clear and quantitative comparison of ExxonMobil’s projections against the state of the science in the public domain,” said Dr. Collins, a lead author of a chapter on climate projections in a 2018 report by the Intergovernmental Panel on Climate Change, a body of experts convened by the United Nations.

The new research showed that Exxon’s projections “were very consistent over time,” he said. “They knew all of that. They’ve known it for decades.”

Edward Garvey, who was hired by Exxon in 1979 to help senior scientists at the time work on its supertanker project, said he was “not surprised that the science was spot on.”

Dr. Garvey and his colleagues set up a dedicated monitoring system on the 500,000-ton Esso Atlantic supertanker to log carbon dioxide measurements in surface water and the air as it traveled from the Gulf of Mexico to the Persian Gulf — an ambitious and novel research effort, he said.

The wealth of data the scientists collected, Dr. Garvey said, pointed to significant increases in carbon dioxide levels in the ocean near the Equator, and was later critical to understanding the role the ocean was playing in limiting warming. At around the same time, Exxon also expanded its research into climate modeling, hiring prominent scientists from academic institutions. But in 1982, as oil markets slumped from a glut in oil production, Exxon terminated its supertanker project.

“What I am surprised about is that despite all of this knowledge within the company,” Dr. Garvey said, “they continued down the path that they did.”

Microsoft Bets Big on the Creator of ChatGPT in Race to Dominate A.I.

Lisa Marie Presley, the Daughter of Elvis Presley, Dies at 54