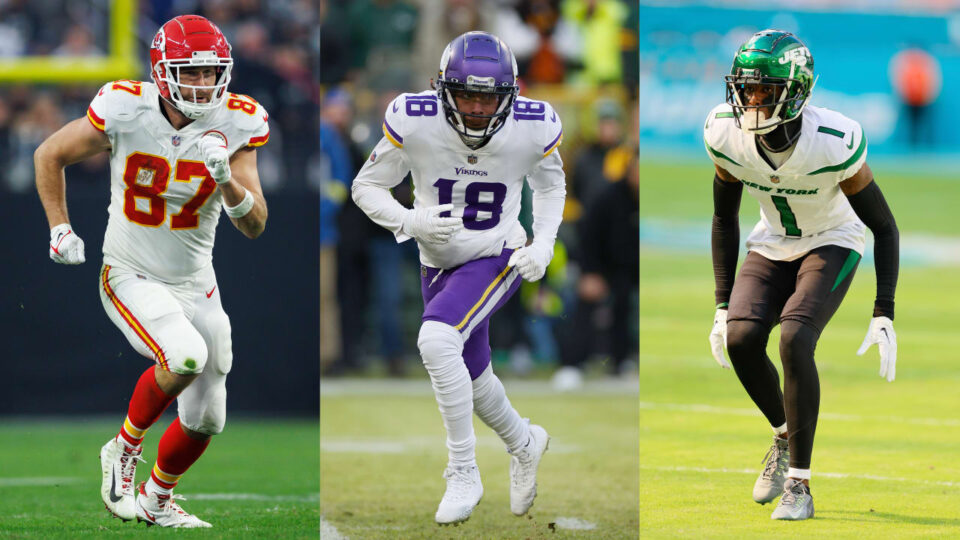 Travis Kelce and Justin Jefferson are unanimous choices for The Associated Press 2022 NFL All-Pro Team, and Sauce Gardner is the first rookie cornerback selected in 41 years.

The Chiefs’ Kelce and the Vikings’ Jefferson received first-team votes Friday from all 50 members of a nationwide panel of media members who regularly cover the league.

Gardner, the fourth overall pick by the New York Jets, was named on all 50 ballots, receiving 43 first-place votes. Pro Football Hall of Famer Ronnie Lott was the last rookie cornerback chosen for the first team in 1981.

“That’s a big deal to me,” Gardner told the AP. “It was one of my goals before training camp. It’s something I pray for. I worked so hard for it. It’s a true blessing for sure.”

Kelce’s older brother, Jason, also earned first-team honors for the fifth time in his career to stay one ahead of his pass-catching brother. Jason Kelce’s fellow Philadelphia Eagles linemate, right tackle Lane Johnson, joins him on the squad.

“Big honor, especially happy for (Johnson) who is the best tackle in the NFL without question, especially on the right side,” Jason Kelce told the AP.

Johnson, a second-time All-Pro, has missed the past two games with an adductor injury but hopes to return when the No. 1 seed Eagles host a divisional round playoff game next week.

“We put in a lot of time and effort in the game, especially as you get older, you start to cherish it,” Johnson told the AP.

Las Vegas Raiders running back Josh Jacobs is among the 16 first-time All-Pros. Jacobs led the NFL in rushing with 1,653 yards, scored 12 touchdowns rushing and averaged 4.9 yards per carry. The Raiders had three first-team picks despite finishing 6-11.

“The year definitely didn’t go the way we wanted it to but, individually, it’s definitely an honor to be selected,” Jacobs told the AP.

Jefferson, who had a league-best 128 catches and 1,809 yards receiving, is the other newcomer on offense. Miami’s Tyreek Hill made it for the fourth time, third as a receiver. Hill had 119 catches for 1,710 yards and seven TDs in his first season with the Dolphins. Raiders wideout Davante Adams got the nod for a third time. Adams had 100 receptions for 1,516 yards and 14 TDs in his first season in Las Vegas.

Mahomes also was an All-Pro in 2018 when he was the NFL MVP. He led the league with 5,250 yards passing and 41 TDs, helping the Chiefs go 14-3 to capture their seventh straight AFC West title. Philadelphia’s Jalen Hurts got one first-team vote, preventing Mahomes from being a unanimous choice.

Cowboys edge rusher Micah Parsons, 49ers linebacker Fred Warner and Steelers safety Minkah Fitzpatrick are the only returning All-Pros on defense. It’s a third time for Fitzpatrick. Parsons, who had 13 1/2 sacks, made it as a linebacker his rookie season last year.

“I tell my wife my goals every day so she can keep me accountable and make sure I do the right thing and it was became a Pro Bowler and an All-Pro,” Williams told the AP. “To get this news, all the work I put in has paid off and I gotta continue to do the same thing.”

All six special-teams players are first-timers, too.

Copyright 2023 by The Associated Press

Chargers WR Mike Williams downgraded to out vs. Jaguars, could miss a few weeks with back fracture