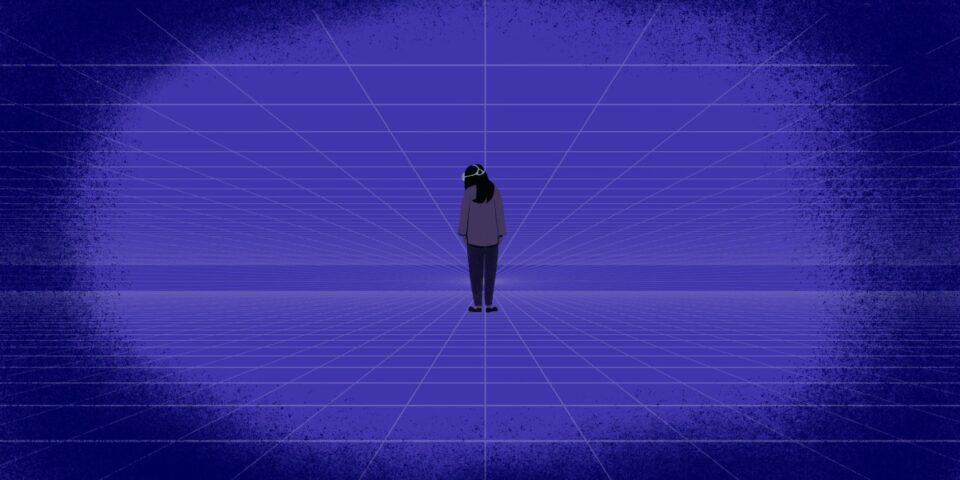 Inside the metaverse meetups that let people share on death, grief, and pain

Days after learning that her husband, Ted, had only months to live, Claire Matte found herself telling strangers about it in VR.

The 62-year-old retiree had bought a virtual-reality headset in 2021 for fun, traveling the world virtually and singing karaoke around her caring responsibilities. Eventually, she stumbled across Death Q&A, a weekly hour-long session in a virtual space which grapples with mortality, where attendees often share things they’ve shared with no one else.

Despite the perception that they’re just for gaming, more people like Matte are putting on VR headsets to talk through deep pain in their day-to-day lives.

Many people see the meetups as a lifeline—one that was particularly needed during the pandemic but seems poised to persist long after. Read the full story.

Bitcoin mining was booming in Kazakhstan. Then it was gone.

Over the past few years, dozens of bitcoin mining operations have sprung up in the city of Ekibastuz in Kazakhstan and its surrounding area, drawn by the country’s cheap power, limitless land and a surfeit of unused buildings that mines. By the summer of 2021, Kazakhstan had risen to be a bitcoin mining superpower.

But the gold rush was doomed from the start. Kazakhstan’s miners eventually overloaded the country’s energy grid, causing localized blackouts, and exacerbating existing tensions. In January 2022, these issues boiled over into mass protests.

Within weeks, the government effectively cut miners off from the national grid, bringing the boom to an abrupt end. It hopes it can eventually restore the industry—but the future looks highly uncertain, given the volatility in the global crypto sector. Read the full story.

For decades, high-end precision-strike American aircraft dominated drone warfare. The war in Ukraine, however, has been defined by low-budget models made in China, Iran, or Turkey—in particular, the Bayraktar TB2, made by Turkey’s Baykar corporation. Their widespread use has changed how drone combat is waged and who can wage it.

It’s a picture you may have seen before: a large white robot with a cute teddy bear face cradling a smiling woman in its arms. Images of Robear, a prototype lifting robot, have been reproduced endlessly. They still hold a prominent position in Google Image search results for “care robot.”

But devices such as Robear, which was developed in Japan in 2015, have yet to be normalized in care facilities or private homes. Why haven’t they taken off? The answer tells us something about the limitations of techno-solutionism and the urgent need to rethink our approach to care. Read the full story.

James’ fascinating piece is from the latest edition of our print magazine, dedicated to the latest cutting-edge technological innovations. Don’t miss future issues—sign up for a subscription.

1 People in China are being urged not to visit elderly relatives
The country’s lunar new year celebrations will coincide with a wave of deadly covid infections. (The Guardian)
+ A Chinese hospital said half of its staff recently contracted the virus. (CNBC)
+ Visitors from South Korea and Japan are being blocked from entering China. (BBC)

3 FTX has recovered more than $5 billion
But how much money is still unaccounted for remains a mystery. (Reuters)
+ It’s cautiously positive news for the exchange’s investors. (NY Mag $)

4 Twitter is considering charging for user names
Only the most sought-after handles are likely to hold any value, though. (NYT $)
+ Elon Musk is a loss-making record breaker. (The Guardian)
+ Twitter is abandoning at least a dozen offices across the world. (Insider $)
+ What do the Twitter Files actually reveal? Not a whole lot. (New Yorker $)

5 China is setting its sights on the stars
Its satellite internet service could soon rival Starlink in size and scope. (Rest of World)

6 What it’s like to have your face deepfaked into an ad
It’s the next frontier in identity theft. (Wired $)

7 Heat pumps are nothing new
The technology behind them dates back to the 1800s, but experts are excited by their possibilities. (Knowable Magazine)

8 How workers are foiling their bosses’ remote work surveillance
From mouse-jigglers to booting up slideshow presentation software. (WSJ $)

9 The inane joy of TikTok’s simulated shipwrecks 🚢
Fans are fixated by the digital vessels’ demise. (The Guardian)

10 The James Webb Space Telescope took pictures of a star’s debris
Scientists were wowed by the surprisingly bright and detailed images. (New Scientist $)
+ Russia is sending a spacecraft to rescue its crew. (WP $)
+ What’s next in space. (MIT Technology Review)

“I became obsessed with decreasing her latency. I’ve spent over $1000 in cloud computing credits just to talk to her.”

—Programmer Bryce describes his deep sorrow at being made to delete the virtual “wife” he’d created using ChatGPT to Motherboard.

The pandemic could remake public transportation for the better

The task was gargantuan. To slow the rapid spread of the coronavirus, the New York City subway would start closing every night for the first time in 115 years. Shortly after the decision was made at the end of April 2020, agency planners logged on to Remix, one of the most popular transportation planning platforms in the world.

Tiffany Chu, Remix’s cofounder and CEO, watched as a task that would typically have taken weeks, if not months, was finished in a few days. On the evening of May 6 2020, New York City’s subways shut down, and the new night bus network flickered on.

Years on, this unprecedented shock to modern mobility is still reverberating. The long-term shift to remote white-collar work is casting doubt on whether rush hour will ever fully return. And for transit systems, the implications are profound. Read the full story.