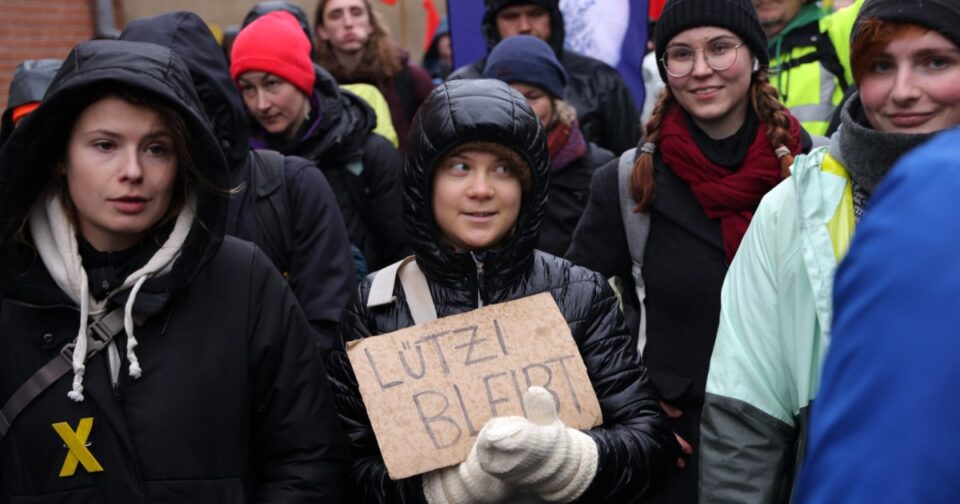 Around 6,000 protesters — including climate activist Greta Thunberg — marched through mud and rain to the German village of Luetzerath on Saturday, according to a police estimate, demonstrating against the expansion of an opencast lignite mine.

The clearing of the village in the western state of North Rhine-Westphalia was agreed between RWE and the government in a deal that allowed the energy giant to demolish Lutzerath in exchange for its faster exit from coal and saving five villages originally slated for destruction.

“This is a betrayal of present and future generations… Germany is one of the biggest polluters in the world and needs to be held accountable,” Thunberg said on a podium, after she marched with a cardboard sign saying in German “Luetzi stays”, using a shortened name of the village.

Regional police said on Twitter it had used force to stop people from breaking through barriers an nearing the danger zone at the edge of the excavation area.

Earlier this week, police cleared out protesters from buildings they have occupied for almost two years in attempt to stop the nearby mine’s expansion.

On Saturday, only few remained camping out in treehouses and an underground tunnel, but thousands turned up to protest against the mine, which activists say symbolises Berlin’s failing climate policy.

The president of North Rhine-Westphalia told German radio Deutschlandfunk on Saturday that energy politics was “not always pretty” but that the coal was needed more than ever in light of the energy crisis confronting Europe’s biggest economy.

Earlier Economy Minister Robert Habeck told Spiegel on Friday that Lutzerath was the “wrong symbol” to protest against.

“It is the last place where brown coal will be mined — not a symbol for more-of-the-same, but for the final frontier.”

But activists have said Germany should not be mining any more lignite and focus on expanding renewable energy instead.