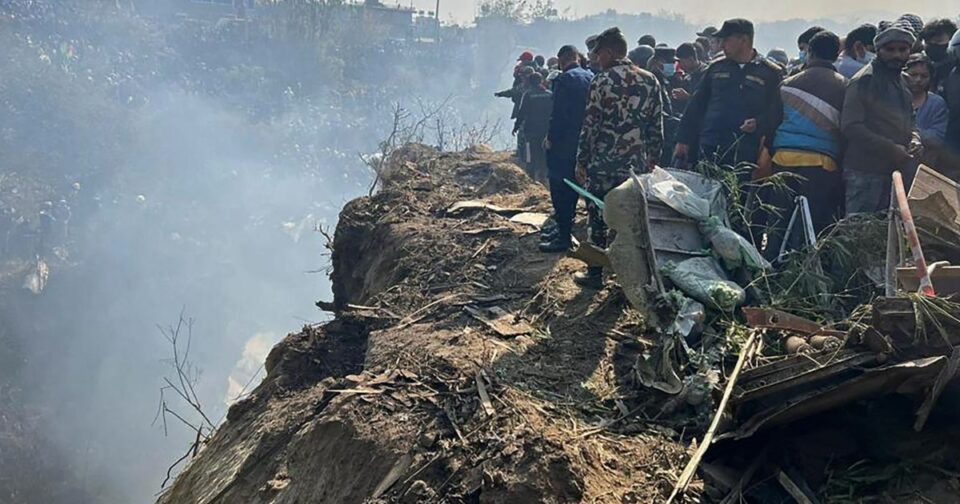 A 72-seat passenger aircraft crashed into a gorge while landing at a newly opened airport in Nepal‘s central resort town of Pokhara on Sunday, killing at least 32 people, an official said.

Rescuers were scouring the crash site near the Seti River, which is nearly a mile away from Pokhara International Airport, and were expecting to find more bodies, said Tek Bahadur K. C., a senior administrative officer in the Kaski district.

It was not immediately clear what caused the plane to crash.

The foreigners included five Indians, four Russians, two South Koreans, and one each from Ireland, Australia, Argentina and France.

Prime Minister Pushpa Kamal Dahal, who rushed to the airport after the crash, said the plane was flying from the capital, Kathmandu, to Pokhara. He urged security personnel and the general public to help with the rescue efforts.

Images and videos shared on Twitter showed plumes of smoke billowing from the crash site as rescue workers, Nepali soldiers, and crowds of people gathered around the wreckage of the aircraft.

Pokhara, located 125 miles west of Kathmandu, is the gateway to the Annapurna Circuit, a popular hiking trail in the Himalayas. Pokhara International Airport began operations only two weeks ago.

Nepal, home to eight of the world’s 14 highest mountains, including Mount Everest, has a history of air crashes.

Last year, 22 people died when a plane crashed on a mountainside in Nepal. In 2018, a US-Bangla passenger plane from Bangladesh crashed on landing in Kathmandu, killing 49 of the 71 people aboard.

In 1992, all 167 people aboard a Pakistan International Airlines plane were killed when it plowed into a hill as it tried to land in Kathmandu.