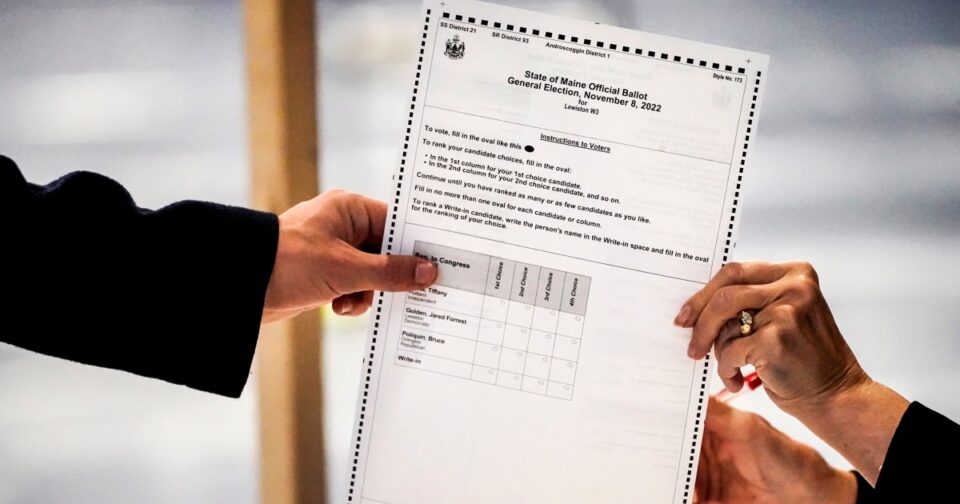 Ranked-choice voting is having a moment. The past year saw not only an expansion in the use of ranked-choice systems but also increased interest in instituting it more widely. And in 2023, legislatures in at least 14 states will consider bills that would move them to this increasingly popular model.

In ranked-choice elections, voters identify their first choices on their ballots, then rank the other candidates in order of preference. If no candidate receives a majority of first-choice votes on the first count, the election moves to an instant runoff. The candidate with the fewest votes gets eliminated, and ballots cast for that candidate are recast for voters’ second choices. The process repeats itself until a candidate reaches a majority.

Advocates of ranked-choice voting have long said the setup benefits moderate candidates who don’t play to either party’s fringe and work instead to appeal to the broadest number of people.

State lawmakers in both major parties seem to be listening to that argument.

Just two weeks into 2023, lawmakers in 14 states have introduced, filed and prefiled 27 bills that propose various iterations of ranked-choice voting, according to an NBC News review.

The variety and quantity underscore a growing trend in elections across the country: ranked-choice voting is clearly on the rise.

“This year we’re already seeing a lot of state legislation, and we’re going to see a lot more,” said Rob Richie, the president and CEO of FairVote, a national nonpartisan group that has for decades worked to advance the use of ranked-choice voting in the U.S. “Some of it will pass.”

In 2020, Virginia lawmakers enacted a pilot program for ranked-choice voting in local elections through 2031; a handful of localities have so far used the system. The state GOP used a ranked-choice voting system at its state convention in 2021 to select a gubernatorial nominee. Supporters of the system say it more easily allows a candidate with broad crossover appeal to advance; the winner, Glenn Youngkin, went on to win the general election.

“Advocates all over the country use the GOP nominating contest in Virginia as a prominent successful test case. And that’s important because sometimes it gets painted as a progressive issue, and it’s really not. It really benefits both parties, and that’s such a good example of it being used on the right,” said Liz White, the executive director of UpVote Virginia, a nonpartisan election reform organization that supports ranked-choice voting.

“It really appears that both parties in Virginia are moving steadily down a road toward accepting RCV on a wider scale,” White said.

Lawmakers in Oklahoma and Montana introduced bills that would allow officials to enact ranked-choice voting in all elections, and Wyoming legislators proposed creating a pilot program for its use in local and municipal elections in the state.

Bills in Maryland and Massachusetts would allow specific towns and cities to use ranked-choice voting in their elections, while bills in Missouri and New Hampshire would create rules for ranked-choice voting, possibly setting the stage for future legislation that would authorize use of the system.

In addition, local ballot measures have already been placed and scheduled to occur in 2023 that would allow voters direct say over whether to enact ranked-choice voting in their local elections. Those are in Redondo Beach, California, and Burlington, Vermont. Both ballot measures are scheduled to be voted on in March.

Discussions are also underway among policymakers in Arizona, who are looking at ranked-choice voting as a possible way of curbing extremism.

“This is going to be a year of progress,” FairVote’s Richie said.

Ranked-choice voting advocates like Richie say they’re amped about that progress and continue to argue that the system changes politics for the better by incentivizing candidates to avoid pandering to their bases and going negative. They say that’s because those candidates must continue to appeal to voters as a second, third or even fourth choice in elections given the way most ranked-choice voting models function.

In many states, some of the purported strengths of the system promised by supporters — such as a rejection of polarizing candidates — came to fruition. In Alaska, for example, where ranked-choice voting was used for the first time in the state’s Senate and congressional races, voters chose incumbent Sen. Lisa Murkowski and Mary Peltola for those offices over more extreme candidates.

“Ranked-choice voting forces candidates to build coalitions and appeal to people they’re not used to appealing to,” said White, of UpVote Virginia. “And it forces voters to do the same with candidates they may not have otherwise taken a look at.”

2 killed in shootout with federal agents near Puerto Rico

Death toll in Russian strike on Ukrainian building rises to 40