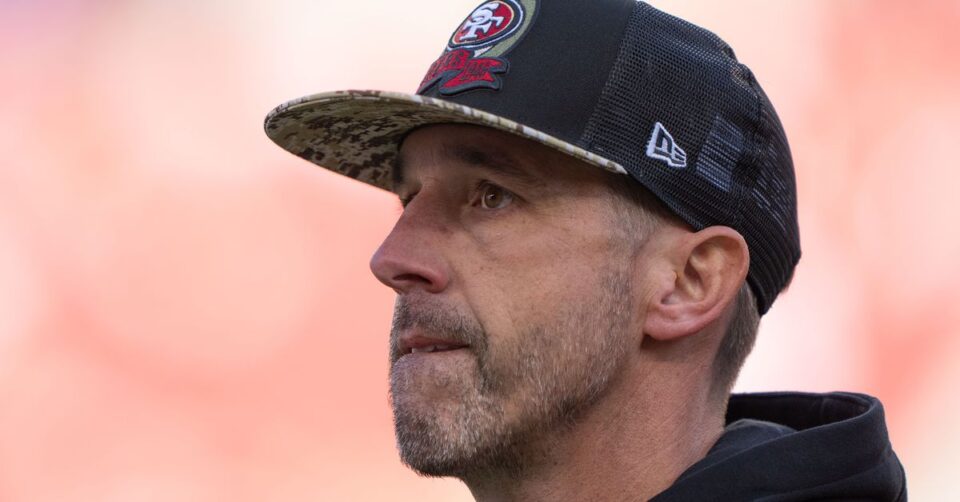 Throughout the 49ers’ 41-23 win over the Seattle Seahawks, the coach found ways to stress the Seattle defense both on the ground, and through the air. Rookie quarterback Brock Purdy, starting his first playoff game, posted solid numbers as he completed 18 of 30 passes for 332 yards and 3 touchdowns, numbers that topped the playoff debuts from a pair of San Francisco greats: Joe Montana and Steve Young.

San Francisco gained 505 yards of total offense in the victory, and averaged 7.9 yards per play.

Diving into the performance a little more, look at how efficient Purdy was on Saturday afternoon:

Purdy averaged 0.72 Expected Points Added per Play on Saturday, with an Average Depth of Target of nearly 12 yards. The offense as a whole impressed, particularly when throwing on early downs:

Turning to how this looked on the field, Shanahan hit the Seahawks with an almost dizzying array of presnap movement and motion, finding different ways to put San Francisco’s impressive offensive talent in advantageous positions.

Take this play from early in the game, where Purdy connects with Brandon Aiyuk on a backside dig route:

Think about everything the Seahawks had to decipher before the snap. San Francisco breaks the huddle with “21 offensive personnel,” with two running backs, two wide receivers, and a tight end.

The personnel alone poses a problem.

This is the formation when the ball is snapped, giving the 49ers four threats to one side of the field.

So of course Purdy throws a backside did to Aiyuk on the other side of the formation.

Shanahan also found a few different ways to stress Seattle’s single-high zone coverage schemes, often through dig routes. On this completion from Purdy to Aiyuk late in the second half, Shanahan dials up a variation of his Burner concept, which is a play-action design pairing a deep corner route with a dig route. Here, the 49ers do not use play-action, but the deep corner route from the speedy Danny Gray occupies the post-safety, along with the cornerback to his side of the field. Samuel, aligned in a wing on the left, chips on the edge defender before running a sit route over the football. Kittle and McCaffrey release to the flats:

The result? The routes create space for the dig route from Aiyuk, who is wide open over the middle:

Shanahan also used vertical routes, and the threat of the downfield passing game, to create space for receivers working underneath. On this play from early in the second quarter, the 49ers dial up four vertical routes, including McCaffrey out of the backfield. Again, the Seahawks are in single-high coverage, and this vertical concept is a problem for those coverage structures.

So too is Kittle underneath on a shallow route:

Perhaps one of the meanest designs that Shanahan dialed up came at the start of the fourth quarter. With the 49ers holding a 23-17 lead, and facing a 2nd and 11 in Seattle territory, Shanahan called for a play-action design using outside zone as the bait. Purdy targets Jauan Jennings on a wheel route:

Why is this just flat-out mean? A few reasons. First, the situation. With San Francisco facing a 2nd and 11, Seattle might expect run, with the 49ers aiming to get into a manageable third-down situation. You can see that in the defensive alignment, as the Seahawks call man coverage and have ten defenders within five yards of the ball.

Second, they show outside zone into the boundary, to the left side of the formation. Throwing a wheel route out of an outside look is something the 49ers have done before, but usually to the right side of the formation, where it is an easier throw for the quarterback. Here, Purdy needs to execute the fake, quickly flip his hips, and set the hallway for a throw downfield. It’s not what you’re expecting from the offense.

Which are all reasons why it works.

But perhaps the best example of how impressive Shanahan was Saturday afternoon comes through looking at two plays. First, this run from the first quarter, a toss play to Samuel:

Again, you see some of the presnap movement discussed earlier. The 49ers break the huddle with 21 offensive personnel: Aiyuk, Kittle, McCaffrey, Juszczyk, and Samuel. McCaffrey, Juszczyk, and Aiyuk start the play on the right, with Kittle aligned on the left and Samuel in the backfield. But Juszczyk then shifts into a fullback’s alignment, in front of Samuel in the backfield, while Aiyuk shifts across the formation, into a tight alignment on the left.

Samuel gets the pitch and aims for the left edge, with Juszczyk leading him to the outside. It goes for a 22-yard gain, with the key block perhaps coming from Juszczyk, as he meets safety Ryan Neal in the alley.

Early in the second quarter, the 49ers show the Seahawks the same basic look — with the same presnap movement — but sell the Seahawks on the pitch before the snap, as Juszczyk slides in motion towards the left side of the offense. Only, no pitch is coming. Instead, Purdy fakes the pitch, and throws a slant route to McCaffrey on the right side of the offense. As this play unfolds, watch how the Seattle defense reacts to the threat of the pitch, and how that reaction creates space for the slant route:

Purdy is certainly grabbing the headlines, and with good reason. His rise from “Mr. Irrelevant” to playoff-winning quarterback is a fantastic story, and the rookie QB is playing very well.

But the job of a coach is to put his players in the best position to be successful, and that is exactly what Shanahan is doing with this offense. With the incredible talent he has in place — including a few different players who can thrive in various roles on offense — Shanahan is stressing defenses, and creating opportunities for his rookie quarterback to succeed.

So as we praise Purdy for his meteoric rise this season, we should also take some time to praise Shanahan, who is finding different ways each game, each quarter, and even each drive, to stress defenses.

Putting Purdy in a position to succeed.

Who is Dolphins QB Skylar Thompson, and why is he starting against the Bills?