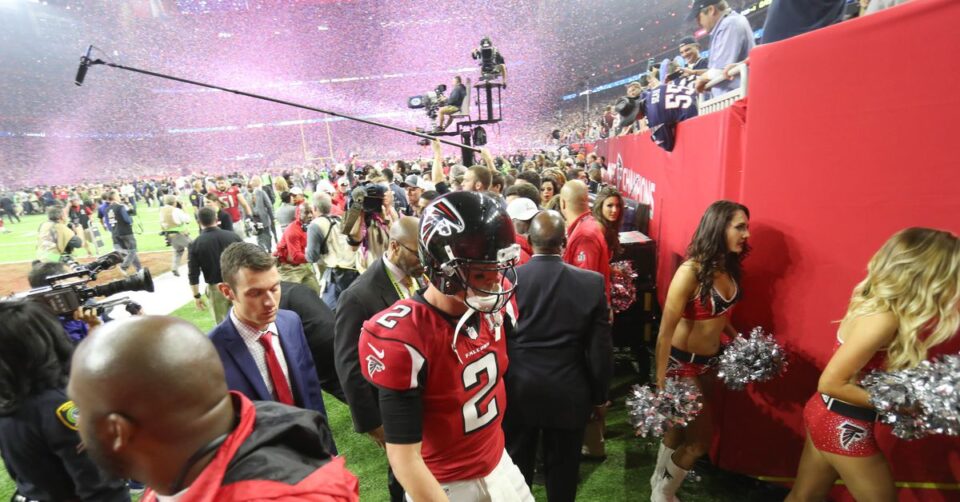 Why even bring up 28-3, you ask? Because I, an innocent person minding my own business, am catching stray after stray after that loss. Friends and family are texting me the Falcons’ logo in Chargers powder blue and gold. Matt Ryan is trending on Twitter for all the wrong reasons. It’s been nearly six years since the Falcons put us through that hellish loss, and frankly, I’m eager for another team — ANY other team — to take on the humiliation of the most embarrassing playoff loss in recent memory.

But do the Chargers really deserve it? Emphatically, yes.

I know what you’re thinking, because my Patriots fan husband already said it out loud to me: Losing the Super Bowl is worse than losing in the Wild Card round. And, yeah, y’all have a point. That loss hurt worse than any other blown Falcons lead I’ve had the misfortune of witnessing, and we’re talking about the Falcons, so I’ve witnessed several.

The other mitigating factor here is the opponent each team faced in these blown-lead postseason losses. The 2016 Patriots finished the regular season 14-2. Including that postseason, the Patriots had a point differential of nearly 12, which was the largest of any of the Bill Belichick-Tom Brady era Patriots teams that won the Super Bowl. The Falcons, with an offense dynamic enough to win Matt Ryan the MVP award that season, finished 2016 11-5 and had a point differential of just over 8 points.

The 2022 Jaguars aren’t even close to the juggernaut that the Patriots were during Brady’s 18-year tenure with the team, a span that saw New England win 17 AFC East titles, 11 back-to-back, and land in nine Super Bowls, winning six of them.

The Jags were “coached” by Urban Meyer last season until Shad Khan put the team out of its misery and fired him after he demonstrated “leadership” in unusual ways, like skipping a team flight home after a loss to the Bengals to hang out in a bar with a woman who isn’t his wife, and kicking Josh Lambo in the leg pre-game after saying, “Hey dipshit, make your fucking kicks,” like a true “leader of men.”

The 2022 Chargers finished 10-7 to lock up a Wild Card spot, while the Jaguars won the weakest division in the AFC at 9-8 despite a five-game losing streak mid-season. The Jaguars also beat the Chargers 38-10 early in the 2022 season, an embarrassing loss Brandon Staley apparently didn’t learn a damn thing from. He also hasn’t learned from his own team’s injury history. He played starters deep into the Chargers’ Week 18 game against the Broncos, a game that didn’t matter for his team’s playoff position, and Mike Williams, who led the team with 895 receiving yards this season, ended up missing the Wild Card matchup with a fractured back as a result.

But anything can happen in the playoffs, right? Sure, but this was an incredibly improbable win by the Jaguars. Just look at the win probability chart from that game.

The Jaguars turned the ball over five times in the first half. The Chargers turned the ball over zero times. The Jaguars never held a lead in the game, not once, until the very end of regulation. The Chargers held a lead from their first touchdown with 13:33 left in the first quarter until Riley Patterson knocked that Jags field goal through the uprights when the clock hit 0:00.

The Patriots turned the ball over twice in Super Bowl LI — Tom Brady threw a pick-six to Falcons cornerback Robert Alford, and LeGarrette Blount lost a fumble. The Falcons took a lead early in the second quarter, and held onto that lead until the Pats scored just over four minutes into overtime, so the Chargers have them beat there — not by much, but they held a lead for longer.

And the Falcons took the Patriots to overtime for the first time in Super Bowl history. Flaring tempers and bad decisions by the Chargers, specifically Joey Bosa, put the Jaguars in position to win this one outright in regulation. Atlanta ran into a buzz saw in Super Bowl LI. The Chargers dropped the buzz saw on their own feet against the Jaguars.

So Falcons fans, congratulations. We can finally put 28-3 behind us. Bring on the 27-0 jokes. This is the Chargers’ burden to bear now.

The repercussions Dana White might face for slapping his wife

Win or lose, this is not the end for Tom Brady