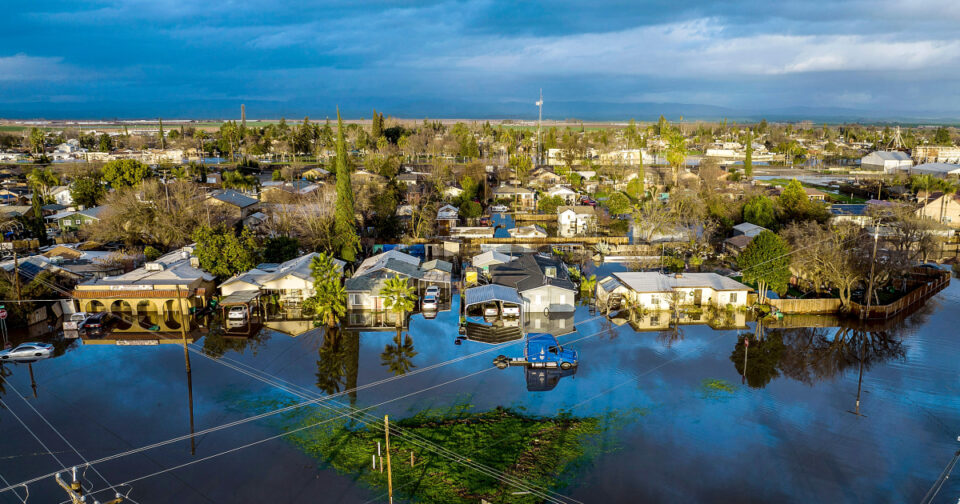 David Rodgers had barely driven one block from his central California home when floodwaters began to rise so high he could touch them with an outstretched hand.

From behind the wheel of his wife’s small SUV, the commercial truck driver watched as cars in front of him slowly filled with water and then floated down the street.

“It was like watching the Titanic, but you’re living it,” Rodgers said.

He and his wife, his mother-in-law and three children panicked as a big rig drove past their car and its giant wake crashed over them. He tried to remain calm but his children were frantic.

The harrowing scene unfolded last week while the family escaped an onslaught of torrential rains that pounded much of California, knocking out power to hundreds of thousands of people and contributing to at least 20 deaths.

Residents across the state are just beginning to understand the full extent of the damage, especially in marginalized communities, as they recover from the deluge.

“It’s going to take some time to reveal how bad this event is,” said Brett Sanders, a professor of civil and environmental engineering at the University of California, Irvine. “Consequences of natural disasters can linger for years, and often assistance comes too late for disadvantaged communities.”

Sanders is among a handful of researchers at UCI studying how low-income neighborhoods are disproportionately at risk for and affected by flooding. He helped develop a high-resolution flood modeling platform that can assess risk every 10 feet across the 2,700-square-mile expanse of the greater Los Angeles basin.

The framework, described in a paper published October in Nature Sustainability, connects hazards from rainfall, stream flow and storm tides with demographic data including population density, ethnicity, race and economic disadvantage. Richard Matthews, who co-authored the paper, said the outcomes observed in Los Angeles can easily be applied to the entire state.

“Almost all of the attention of flooding has been on coastal flooding — that’s where the wealthiest populations live and it’s so dramatic,” he said.

“Many of those people have insurance and can rebuild, sometimes safer and better than before,” he said. “What poorer residents are likely to face is displacement or higher rents if properties are upgraded to better protect against things like floods.”

Biden is scheduled to visit California on Thursday to meet with first responders, state and local officials, and communities devastated by the recent floods and storms.

In Santa Cruz County, seasonal farmworker Francisco Naranjo and his family did not have hot water or electricity for two days during the worst of the storms. They took cold showers while the lights flickered on and off, and they ate whatever food was stocked in the pantry.

Sandbags defended the small home he shares with his wife and two adult children, who also work in the fields in nearby Salinas. All around Naranjo, roads were closed, neighborhoods evacuated and houses destroyed.

“We’re low-income people around here,” Naranjo said in Spanish. “They are workers like me who can’t work because of the floods and people are getting worried.”

Before the rains, he waited for work on farms to pick up after a slow end to the year. Employment opportunities shriveled in November, and he knew he would have to wait until after the holidays to return to picking apples, raspberries and other produce. He applied for unemployment in the fall and hoped for new opportunities in January.

But instead of work, Naranjo and other farmworkers are faced with some 20,000 flooded farmland in Salinas, according to early estimates from the Monterey County Farm Bureau, a nonprofit association of farmers and ranchers. Initial estimates put the damage to fields, levees and other agricultural infrastructure between $40 million and $50 million, but that does not include the human cost of lost wages.

Naranjo went from earning $700 a week during the prime picking season to $67 a week on unemployment.

“I’m living off bread and water,” he said.

When asked if he would return to work soon, Naranjo answered: “I don’t know.”

Some two hours away in Planada, a small community of mostly Latino farmworkers, Rodgers has been waiting for insurance adjusters to assess the damage to the home he purchased less than three years ago. He and his wife immediately fell in love with the area while house-hunting — there was a communal feeling to the place and plenty of playmates for his children.

“Everybody seems to take care of each other,” he said. “I feel bad for many of these families — a lot of them don’t have insurance because they’re renters, and all this flooding basically takes away their home.”

Rodgers’ home was flooded last week in ankle-deep water. Family photos, important documents and heirlooms were destroyed as water seeped into his house when nearby Miles Creek overflowed, he said.

It took only a few hours for floodwaters to inundate Planada, which remained underwater for several days. At one point, Rodgers was forced to drive his commercial big rig using just a flashlight because floodwaters had risen above his headlights.

“We didn’t have any warning until it was too late,” he said. “In my head, I thought if it was that bad, someone would come tell us, but no one ever did. We got out just in time.”

These are all the public universities that have instituted TikTok bans