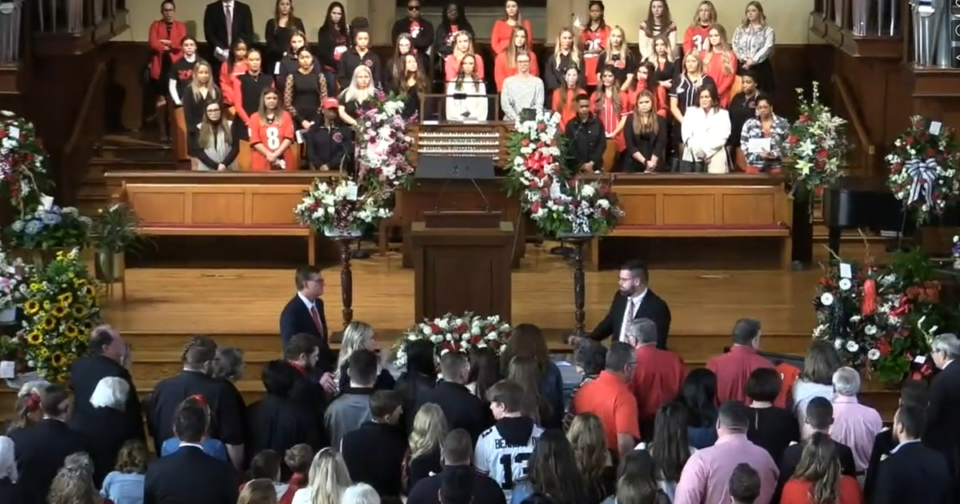 Chandler LeCroy’s extended family has grown considerably larger in recent days. That was evident by those who attended her funeral Wednesday in northeast Georgia, the place she lived most of her life.

Whether it be the Georgia Bulldogs, the state of Georgia or the college football world, they will now be forever part of the LeCroy family. Those who spoke at the service at the First Baptist Church of Toccoa said she always shined a bright light for others.

“She knew she was blessed and did her best to be a blessing to everyone she came in contact with,” Senior Pastor David Ritcey said about the University of Georgia football recruiting staffer who died in a car crash in Athens on Sunday. “It’s obvious today with this turnout … this show of love.”

LeCroy, 24, and Georgia offensive lineman Devin Willock were both killed in the early morning crash. Offensive tackle Warren McClendon and fellow recruiting staffer Tory Bowles were also inside the vehicle but survived.

Explore‘A beam of light’: Chandler LeCroy left a legacy in UGA football and beyondWednesday’s mourners included family, friends and members of the UGA football team and staff. Several of those who spoke wore red roses and ties. Many attendees also wore the Bulldogs’ colors, which adorned LeCroy’s casket.

“We hope she could look around this church today and just see how many lives she touched and the impact she made on this Earth. There was never a dull moment with her,” Associate Director of Recruiting Operations Angela Kirkpatrick said. “We know she would want us to have a big party filled with dancing and singing, and of course yelling ‘Go Dawgs’ and barking at anybody that didn’t root for the Dawgs.”

LeCroy was described as someone who touched the lives of everyone she met. As her casket was removed from the church after the service, Lady Gaga’s song “Always Remember Us This Way” played in the background.

“If you were to ask us our favorite things about Chandler, we wouldn’t have enough time in a day,” UGA Associate Director of Recruiting Operations Logen Reed said. “People use the phrase ‘stay in your lane,’ but Chandler tore that line to pieces … for the better, though.”

ExploreGeorgia’s Devin Willock, Chandler LeCroy killed in car crash after title celebrationLeCroy was driving a 2021 Ford Expedition about 2:45 a.m. Sunday when it struck a curb and left Barnett Shoals Road, an Athens Clarke-County police report said. The vehicle broke two utility poles in half and collided with several trees before coming to rest against an apartment building, according to police. Willock, who was riding in the backseat, was ejected from the vehicle and died at the scene.

LeCroy had to be extricated from the vehicle. She was taken to Piedmont Athens Regional Hospital, where she was pronounced dead.

Reed said LeCroy went above and beyond at her “dream job” and found a way to help others. She worked during the summer with meal checks and nutrition, kept snacks stocked, made binders for support staffers and volunteered for anything in operations.

Reed joked that she might have made head coach Kirby Smart and other coaches a bit heavier with her family’s cooking.

“For me and Logen, she made life better, she made life a lot easier,” Kirkpatrick said. “Chandler was a go-getter and she never hesitated if anyone ever needed help.”

Kirkpatrick remembered a time last year when their staff was waiting for a Christmas tree to arrive, but it kept getting delayed. She said she immediately knew the perfect person for the job.

“Let me tell y’all, she gave FedEx a run for their money,” Kirkpatrick said. “If you all were were wondering, the tree was delivered later that day.”

Brett Sanders said he got to know LeCroy more than 10 years ago when he first came on staff at First Baptist as a youth pastor. Sanders said she was as loud at the age of 14 as everyone else combined, and she was one of the first students he could call by name.

“You don’t meet Chandler LeCroy and forget it,” he said.