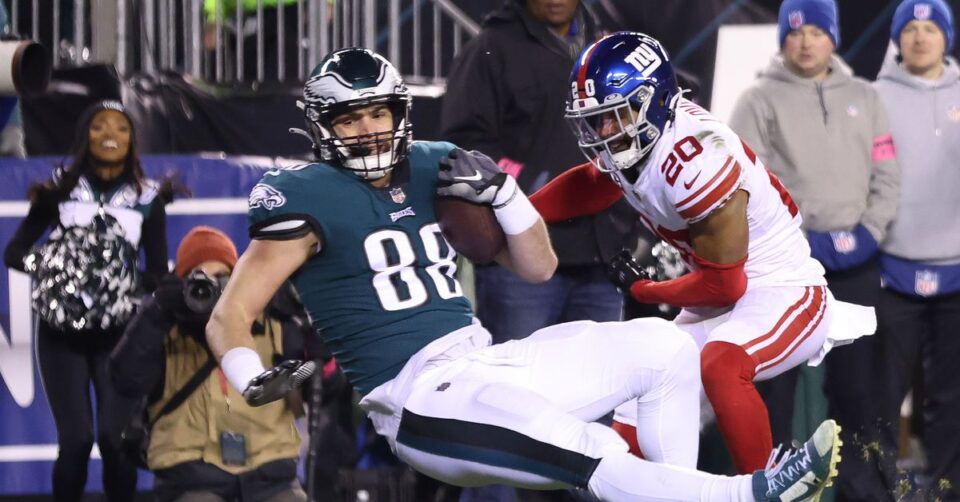 Playoff games during Wild Card weekend were exciting and engaging. The first game of the Divisional Round created some drama as Patrick Mahomes’ injury kept him out for part of the first half and limited him enough to keep the game close.

Saturday night’s NFC East matchup has failed to live up to the excitement of other postseason games so far this year.

The Philadelphia Eagles scored on three of their first four possessions while shutting down the New York Giants offense. Through four possessions for each team, the Eagles had racked up 192 yards while the Giants had just 55.

Early, the third matchup between the two division rivals is looking a lot like the first game between the two when Philadelphia ran out to a 21-0 lead and finished off the win with a 48-22 score.

At halftime, up 28 points, the Eagles are on track to have one of the biggest win differentials in the playoffs during the Super Bowl era. The largest victory margin is 55 points back in 2000, when the Jacksonville Jaguars beat the Miami Dolphins 62-7.

Philadelphia would have had to win by at least 38 points to join a three-way tie for the 10th-biggest margin of victory in the playoffs since 1966.

Instead, the Eagles didn’t score after halftime until late in the fourth quarter when they pushed their lead to 24 points and finished with “just” a 31-point victory. Philadelphia tied six other teams, including their own 2018 victory over Minnesota five years ago to the day (Jan. 21, 2018), with the 25th largest margin of victory since the Super Bowl started.

With a zero on the scoreboard at halftime, the Giants were at risk of being just the 22nd team in the Super Bowl era to be shut out in the playoffs. The last time that happened was in 2016 when the Houston Texans fell to the Kansas City Chiefs 30-0.

Only five teams have been shut out in the playoffs since 1997.

New York got on the board on their second possession of the second half to keep themselves from joining this illustrious group.

Lakers’ LeBron James on Shannon Sharpe’s Spat with Grizzlies: ‘I Always Got His Back’

Have Daniel Jones, Saquon Barkley played their last game with the Giants?