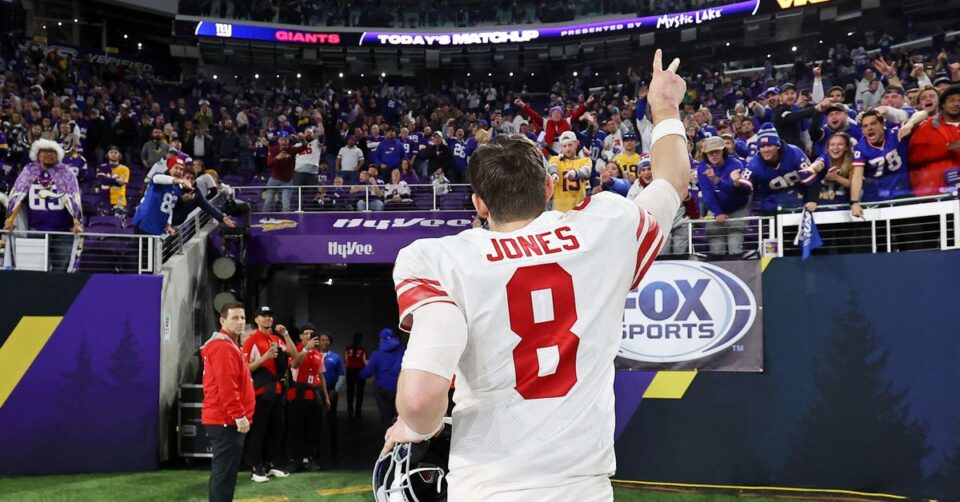 The New York Giants overachieved for most of the 2022 NFL season, improving from a 4-13 record and firing head coach Joe Judge a year ago to winning nine games, making the playoffs, and beating the Minnesota Vikings in the first round last week under new head coach Brian Daboll. Had the Giants season ended there, perhaps the franchise would stay the course with quarterback Daniel Jones, because by most accounts the team was finally trending in the right direction after almost a decade of ineptitude.

But New York’s season is ending on anything but a high note after Saturday night’s 38-7 divisional round loss to the Philadelphia Eagles and Jones played every bit as bad as he did for the first three years of his career. At the end of the regular season, a new contract for Daniel Jones seemed inevitable.

After tonight that is not so clear. Will the Giants ever be good enough with Daniel Jones or will Daboll, the coach most often credited with helping develop quarterback Josh Allen into an MVP candidate with the Buffalo Bills, want the franchise to go out and find his own QB selection?

What a sequence: Daniel Jones runs out of bounds to lose 5 yards on 2nd down, throws an incomplete pass on 3rd down, and then Daboll punts on 4th and 6 with 13 minutes left in the game down 21.

That’s a question that will dominate internal and external discussions as New York approaches the free agency period as Jones is set to be a free agent, and so is star running back Saquon Barkley, himself coming off of a career-high in rushing attempts and yards in 2022 after three seasons of injuries.

Have either one (or both) played their final games with the New York Giants?

With a projected NFL salary cap of $225 million in 2023, the Giants are set to have the third-most space of any team in the league. A franchise tag for Jones is projected to cost a little over $32 million next season, which would eat roughly 75% of their current spending amount for 2023. Only nine quarterbacks in the NFL are set to make more than that next season and though Jones led the NFL with the lowest rate of interceptions (1.1%), he was only 28th in his rate of touchdowns (3.2%).

Jones finished with just 15 touchdown passes, fewer than one per game, but he did rush for 708 yards and seven touchdowns.

Those forgiving of the 25-year-old quarterback will point to New York’s weak supporting cast. The Giants have made huge errors at wide receiver, signing Kenny Golladay to a market-leading contract in free agency and drafting Kadarius Toney with the 20th overall pick in 2021. Golladay had six catches for 81 yards during the entire season. Toney was traded to the Chiefs last year after only playing in 12 games with New York.

And right tackle Evan Neal, a top-10 pick in 2022, was often cited as one of the worst rookie offensive linemen in the league this year.

But if the Giants need to put a better supporting cast around Daniel Jones in order to make him successful, how will they be able to do that if they also pay Jones like a franchise quarterback? A long-term contract will make Jones less expensive in 2023 and give New York a better chance to keep other free agents (like Barkley) as well as going out to find better receivers and offensive linemen on the market. The Giants can also cut bait with some of their disappointing additions, such as Golladay, to open up a little more space.

However, a long-term contract is also a long-term contract. Can the Giants justify paying Jones the potential $30 to $35 million salary for a quarterback who has thrown 36 combined touchdowns over the last three seasons; five fewer than what NFL leader Patrick Mahomes had in 2022 alone, only one more than Joe Burrow and former Daboll mentee Allen’s season totals.

Or should the Giants consider rewarding and building around the 26-year-old Saquon Barkley, now finally healthy and productive again? A franchise tag for a running back is only projected around $8.9 million and New York would have money left over other outgoing free agents. And maybe also a new quarterback.

The Giants shocked a lot of people by going 9-7-1 and then beating the Vikings in the playoffs. That’s reason for them to consider moving forward with the same players who helped them do that. Unfortunately, the Giants also went 1-5-1 against teams in the NFC East, including Saturday’s 31-point loss to an Eagles team that also beat them 48-22 and 22-16 in the regular season.

That’s reason for them to consider moving in a different direction.

Jamahal Hill and the Real Winners and Losers from UFC 283