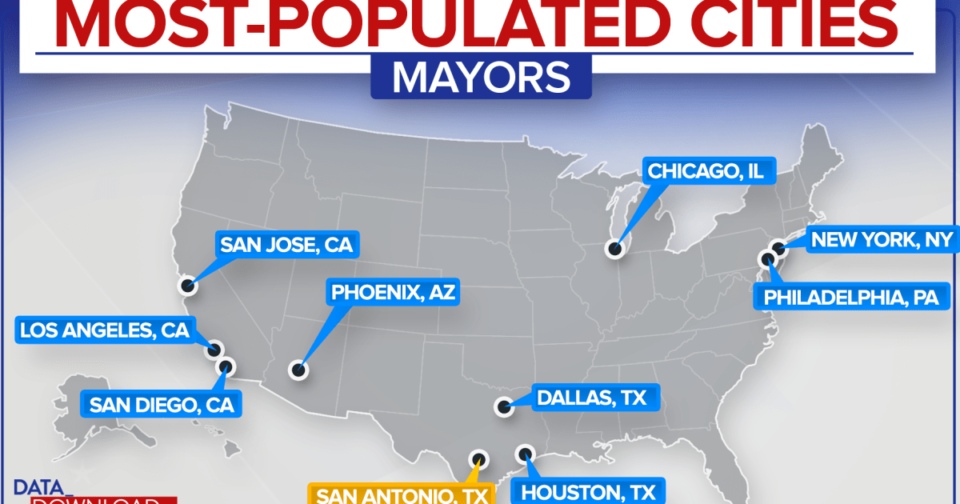 WASHINGTON — One group was noticeably absent among the biggest players in Washington, D.C., last week for the U.S. Conference of Mayors: Republicans.

There are many ways to measure the much-discussed urban and rural divide in American politics, but one area with the steepest divide, at least on the urban side, is over who runs the country’s largest cities.

Take, for example, the 10 largest cities by population. They aren’t just mostly blue; there isn’t a hint of red to be seen among them.

In nine of the 10 largest cities, the man or woman at the desk in the mayor’s office is a Democrat. And it’s not a question of regional biases. From the Northeast (New York) to the Southwest (Los Angeles) to the points in between (Chicago, Houston and Phoenix), Democrats sit in the big chair.

The only outlier is San Antonio, where Mayor Ronald Nirenberg identifies as an independent but is often described as a progressive.

It wasn’t always this way. A little more than 20 years ago, in 2000, four of those 10 cities had Republicans in the mayor’s office, including the country’s two largest cities — New York and Los Angeles.

That’s a pretty big change. And since 2000, neither of those cities had a true Republican mayor, unless you count Michael Bloomberg, who was a lifelong Democrat before he switched parties to capture the mayor’s office in New York — and then switched to become an independent and later back to being a Democrat.

And the Democrats’ ownership of mayor’s offices extends beyond the very biggest cities. If you look further down the line, you see a similar trend.

Among the 25 most populous cities, Republicans hold the mayor’s offices in only three: Jacksonville, Florida; Fort Worth, Texas; and Oklahoma City. Meanwhile, 21 of the top 25 cities have Democratic mayors — plus Nirenberg in San Antonio.

It’s been a long time since Republicans had a major foothold in mayor’s offices — in 2000, they held about a quarter of them in the top 25 cities.

There are political impacts in the GOP’s struggle to capture the top office in America’s biggest cities. While not all mayors stay mayors, as some aim for higher office and become governors or head to Washington to serve in Congress or administrations, they can be a vital part of the “bench” for the national parties.

Fewer Republicans in those top mayoral offices most likely means less knowledge of urban environments among the top voices in the party and, to some extent, less focus on plans and policies aimed at helping cities from the GOP. There are simply fewer cities from which Republican ideas can bubble up, at least among the biggest urban areas.

That’s not to say Republicans are ignoring cities, but the party lacks real-world governing opportunities. After all, states aren’t the country’s only “laboratories of democracy.”

And, perhaps emphasizing that point, the Democratic advantage in those cities isn’t just about mayoral candidates; it carries over into national races, as well. Look at the results from the 2020 presidential election.

The only outliers in the group were Oklahoma County, which former President Donald Trump won by a single point, and Richmond County, home of New York City’s Staten Island borough. Trump won Staten Island by about 33,000 votes but was trounced everywhere else in New York. Even with Staten Island, Trump lost the five boroughs of New York by more than 1.6 million votes.

Those results raise another important point about the lack of Republican representation in the largest cities. It’s a numbers problem for the party even outside those cities.

The 25 largest cities might look like little blue dots on a map, but they hold a lot of voters.

Those 25 cities are home to 38 million residents, about 12% of the country’s total population and more people than the combined populations of 21 states.

For all the talk of the GOP’s strength in rural communities, which is formidable, and how the suburbs are a political battleground, the population density of the cities is a real strength for Democrats. If Republicans could eat into the Democratic advantage in those places even a little, it might help them a lot in important statewide races.

For now, however, the leadership of the country ’s biggest cities is something of a political blue wall, a sign of the stranglehold the Democrats hold on urban America.

Closing prices for crude oil, gold and other commodities