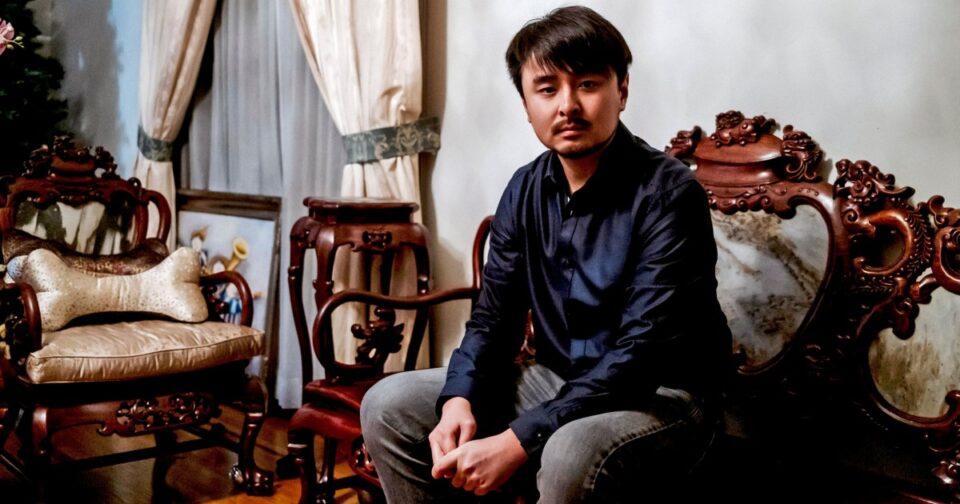 A video of a man disarming the suspected Monterey Park shooter shows him wrestling the gun away and potentially preventing more carnage at a second dance hall minutes after the gunman killed 11 people and wounded at least nine more at the first site.

Brandon Tsay, 26, has been hailed as a hero for disarming the Monterey Park shooter at a dance hall in Alhambra, California.

Harrowing video obtained exclusively by NBC News captured the men tussling in what appears to be an empty lobby in the dance hall.

An armed man, dressed in dark clothing and a hat, walks out of the picture and about 30 seconds later is seen struggling with Tsay as the two wrestle over the weapon. A shoving match ensues, and Tsay manages to take the gun away from the man.

The weapon has been described as a “semi-automatic assault pistol.”

The man then punches Tsay in his head while Tsay holds the weapon. The men continue to struggle before Tsay pushes the man off. The man continues to reach for the gun before he gives up and walks out of the room.

Tsay then points at the man and briefly moves out of the camera’s view before he returns, with the gun in his right hand and using a cellphone with the other.

The entire ordeal lasted about 4 minutes.

“There was a moment I actually froze up, because I was, I had the belief that I was gonna die, like my life was ending here, at that very moment,” Tsay told NBC News’ Lester Holt.

“But something amazing happened, a miracle actually. He started to try to prep his weapon so he could shoot everybody, but then it dawned on me that this was the moment to disarm him. I could do something here that could protect everybody and potentially save myself.”

Tsay said the gunman, who has since been identified as Huu Can Tran, 72 — came in and looked as if he were intent on further violence.

“When he came in, he said nothing,” he said. “His face was very stoic. His expressions were mostly in his eyes — looking around trying to find people, trying to scout the area for other people.”

The motive in Saturday night’s mass shooting is unclear. Law enforcement officials said Monday it appeared to be personal.

Multiple law enforcement sources familiar with the investigation said evidence gathered so far seems to rule out terrorism or a hate crime.

Tsay told ABC News’ “Good Morning America” earlier Monday that most customers had left by the time the shooter arrived at Lai Lai Ballroom & Studio, about 2 miles from Monterey Park’s Star Ballroom Dance Studio, where he carried out his deadly attack about 20 minutes earlier, authorities have said.

Tsay is a computer coder and works at the dance hall a few nights a week as the third generation in his family to operate it, according to The New York Times.

The dance hall was hosting a “social dance party” for Lunar New Year when Tsay “heard the sound of the front door creaking closing and instantly followed by the sound of a metal object clinking together as if they were rubbing,” he told “Good Morning America.”

Tsay said he did not recognize the shooter and described him to ABC News as “somebody I have never seen before.”

“We struggled into the lobby, trying to get this gun away from each other,” Tsay told ABC News. “He was hitting me across the face, bashing the back of my head. I was trying to use my elbows to separate the gun away from him, creating some distance.”

Once Tsay finally obtained control of the gun, he had to threaten to shoot the man before he fled, he told ABC News: “Finally, at one point, I was able to pull the gun away from him, shove him aside, create some distance, point the gun at him, intimidate him, shout at him and say: ‘Get the hell out here. I’ll shoot! Get away. Go!’ And at this point, I thought he would run away, but he was just standing there contemplating whether to fight or to run away. I really thought I would have to shoot him if he came at me.”

The shooter then turned and fled back to his white van, Tsay said, adding that he “immediately called police” as he was still holding the gun.

The shooter later died of a self-inflicted gunshot wound Sunday after a manhunt that ended about 30 miles away. The motive in the dance hall attack remains unknown, Luna told reporters Sunday night.

Monterey Park Mayor Henry Lo told NBC News the gunman may have been targeting his ex-wife on the Lunar New Year.