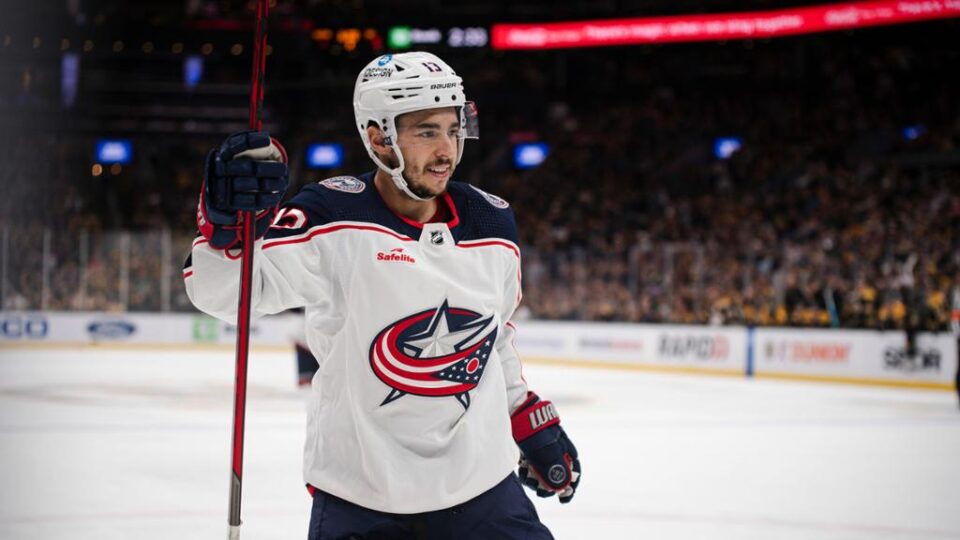 CALGARY — Johnny Gaudreau was given a preview at what his return to Scotiabank Saddledome could be like when the Columbus Blue Jackets play the Calgary Flames on Monday (9:30 p.m. ET, ESPN+, HULU, SN1, SNW, TVAS, SN NOW).

The forward was booed relentlessly by teammates every time he touched the puck during morning skate.

“It was funny, just to lighten the mood a little bit,” Gaudreau said. “It was fun. I could barely even stickhandle I was laughing so hard going up and down the ice. They were all doing it.”

The preview, it turns out, was planned. Teammates hatched the idea on the bus to the rink, and coach Brad Larsen gave the thumbs-up prior to the skate.

“We may or may not have talked about that beforehand. I’m not going to confirm nor deny that,” Larsen said, tongue in cheek. “The player knows. He was here. And your first one back is always the hardest no matter if it’s hostile, not hostile, whatever. You spend a lot of time in one organization, and they went through a lot of ups and downs through it too and he was through thick and thin with them. It always has special meaning no matter what.”

Gaudreau will play in Calgary for the first time since he signed a seven-year, $68.25 million contract ($9.75 million average annual value) with Columbus on July 13. The decision came one day after Flames general manager Brad Treliving announced Gaudreau would test free agency.

Though Gaudreau admitted the process was stressful, he said he wouldn’t change anything.

“I knew how special this place was to me,” Gaudreau said. “Looking back, a lot of people just jump right in and say they’re doing free agency. For me, it was a really long time figuring out what I was going to do. It was super, super hard on me the whole month there trying to figure out if I was going to go or not. But I think that’s what kind of made it special for me, looking back, is realizing how special this place was for me and how much I did love playing here and so many good memories. That’s what made it so tough.”

Gaudreau’s former teammates were understanding, too.

“This whole time he’s been here he’s always said he wanted to play in the [United States] at some point,” Flames forward Mikael Backlund said. “You’ve got to respect that. Going into free agency this summer … during last year it sounded like he was more positive staying and wanted to maybe re-sign. But at the same time, you always knew he wanted to go back to the U.S. and play there at some point. When he made the decision, I wasn’t overly surprised.”

The quick departure, though, could prompt Calgary fans to jeer the former longtime face of the franchise. Gaudreau knows the Flames faithful well and understands the boos he heard from teammates are likely to be amplified. He had 609 points (210 goals, 399 assists) in 602 regular-season games over nine seasons with the Flames, including an NHL career-high 115 points (40 goals, 75 assists) for the Flames in 2021-22.

“I mean, they’re a passionate fan base here. That’s why I loved playing here,” Gaudreau said. “I wouldn’t expect anything else. We had some good times here. The way they supported our team and supported our players, it was awesome to be a part of. They love their Flames. I’m not on the Flames anymore. I’m on the other team, so I get it. That’s what made it so special playing here.”

His teammates understand. And they’ll have Gaudreau’s back.

“There’s going to be a lot of emotion in the building,” said Blue Jackets defenseman Erik Gudbranson, Gaudreau’s Flames teammate last season. “He spent a lot of time here and did a lot of great things. And he’s a tremendous hockey player that was at a crossroads and made a decision.

“However, the reaction’s going to be tonight, it’ll be directed toward him, but he’s going to have a full lineup behind him supporting him and playing hard for him. He’s on a team and he’s got the boys behind him for sure.”