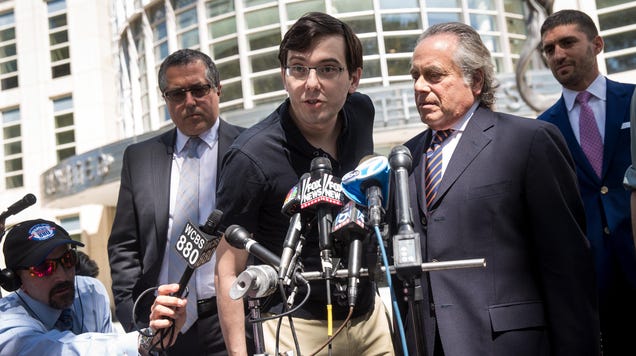 Less than a year after being released from prison, Martin Shkreli is back in regulators’ bad books.

The Federal Trade Commission (FTC) has asked a federal judge to hold Shkreli in contempt “for failing to provide the agency with information needed to determine whether he is violating a previous order by the judge that banned him from working in the pharmaceutical industry for life,” it said on Friday (Jan. 20).

The “pharma bro,” who became the poster boy for greed when his company Turing Pharmaceutical hiked the price of a critical drug over 5,000% in 2016, announced in July that he was working on a “Web3 drug discovery platform.”

The FTC said it’s been chasing Shkreli for months to assess whether or not the tech venture trespasses into the world of pharma. But he just won’t sit down with them.

“Martin Shkreli’s failure to comply with the court’s order demonstrates a clear disregard for the law,” said Holly Vedova, director of the FTC’s Bureau of Competition. “The FTC will not hesitate to deploy the full scope of its authorities to enable a comprehensive investigation into any potential misconduct.”

Brianne Murphy, an attorney for Shkreli, said “this is a misunderstanding with the FTC,” adding that Druglike is a software firm, not a drug company.

September 2017: Shkreli’s $5 million bond is revoked after he offers a $5,000 bounty in a Facebook post asking for Hillary Clinton’s hair to his 70,000-plus followers and he is sent to jail.

March 2018: Shkreli is sentenced to seven years in prison.

January 2020: The FTC and state enforcers initiate a case against Shkreli, another individual executive, and the companies they founded, Vyera Pharmaceuticals, and Phoenixus AG, for raising the price of Daraprim—the gold standard treatment for a rare, potentially fatal parasitic infection known as toxoplasmosis—from $17.50 per tablet to $750 per tablet.

January 2022: US District Court Judge Denise Cote held Shkreli liable for antitrust claims brought by the FTC and state enforcers, saying his conduct was “egregious, deliberate, repetitive, long-running, and ultimately dangerous.” The court imposes a lifetime ban against Shkreli participating in the pharmaceutical industry and fines him $64.6 million in disgorgement.

May 2022: Skhreli is released early from prison—the initial release date was September 2022—and transferred to community confinement.

What the FTC wants from Shkreli

According to its court filing, the FTC is seeking:

🎭 Detested pharma bro Martin Shkreli is going to trial, and America made a musical out of it

🏷️ If high-school kids in Australia can replicate a $750 drug for $2, why is it still so expensive to buy?