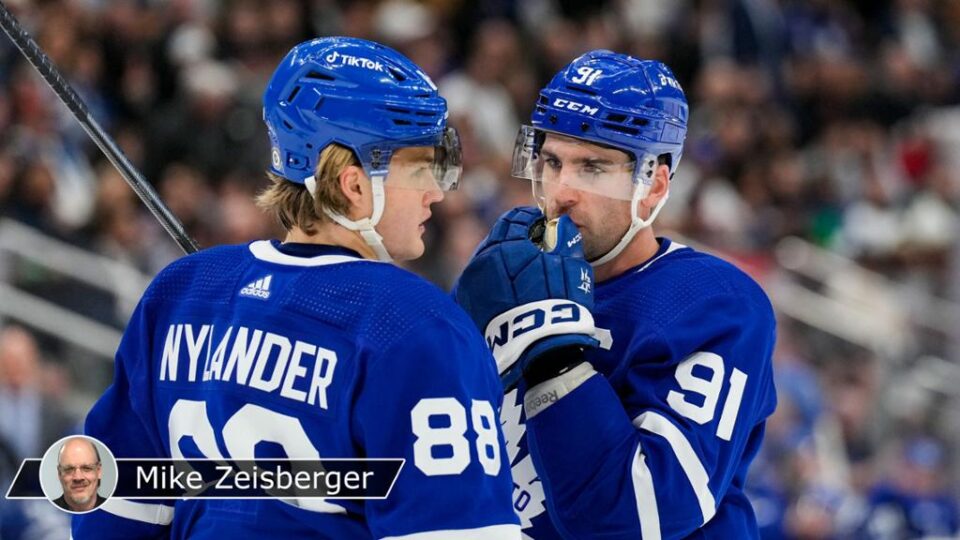 TORONTO — William Nylander and John Tavares are back together again, and the Toronto Maple Leafs plan to keep it that way for the time being.

Maple Leafs coach Sheldon Keefe shuffled the deck in a 5-2 victory against the New York Islanders on Monday, and the move paid instant dividends. With his offense sputtering in the opening 20 minutes, Keefe reunited the two forwards and watched the dynamic duo combine for six points in a four-goal second period.

Given those results, Keefe said it was a relatively simple decision to keep those two together alongside wing Calle Jarnkrok when the Maple Leafs host the New York Rangers at Scotiabank Arena on Wednesday (7 p.m. ET; TNT, SN, SN NOW).

“I saw myself going back to it,” Keefe said after practice Tuesday. “The way the guys responded yesterday tells me it’s a good time to stay with it.”

For much of last season, Tavares and Nylander played on the same line with a variety of wings, while Mitchell Marner and Auston Matthews lined up alongside Michael Bunting. This season, the lines were tweaked with Nylander joining Bunting and Matthews, and Marner joining Tavares and Jarnkrok.

With Toronto looking sluggish and down 1-0 to the Islanders after the first period, Keefe’s shuffling of the lines ignited a four-goal second period in which Nylander had four points (two goals, two assists) and Tavares two (one goal, one assist).

“I don’t look at it as a ‘stale’ type of thing,” Keefe said. “It’s just sometimes you need to change the chemistry a little bit and get a spark.

“The season is long, and I think sometimes it’s important to maintain the chemistry that works both ways. Last season, there were times when Matthews and Marner were really rolling [together] and we changed it up periodically. So, I think it’s important we continue with that.”

Keefe made no promises how long Tavares and Nylander will stay together. But in the short term, he likes what he sees.

“We’re talking about elite players,” Keefe said. “And when they’re playing well, it doesn’t matter who their linemates are because they’re going to find a way to produce and impact games.

“Look at the way that ‘Will’s’ playing and the consistency he brings. For example, last night he doesn’t have a good first period, but then he’s able to fix it and come on and have a great second period. John just the same. That’s a great sign and very healthy for them and for our team. Like I told them, in past years it would take three or four games for them to find it and get back on line. This year, both of them, and Will in particular, have been able to make that adjustment.”

The bottom line: The Maple Leafs’ Big Four — Matthews, Marner, Nylander and Tavares — are producing at a high level no matter who they’re playing with.

Consider this: Matthews, last season’s Hart Trophy winner as the NHL’s most valuable player, has 13 points (eight goals, five assists) during his personal 10-game point streak and is enjoying another fine season with 53 points (25 goals, 28 assists) in 46 games.

Even with those impressive numbers, he trails Nylander in goals (26) and points (56). Marner is tied with Nylander for the team lead in points (17 goals, 39 assists).

As for Tavares, he has 47 points (21 goals, 26 assists) in 48 games and played, in Keefe’s opinion, his best period of the season Monday in the second. The 32-year-old is averaging almost a point per game and is on pace to play his 1,000th NHL game against the Washington Capitals on Sunday.

“I thought we’ve had good stretches in the season by our group, and obviously ‘Willy’ has flipped back with me,” Tavares said. “We’re just trying to work together with Calle and produce some good momentum.

“We’re getting results, and that’s great.”