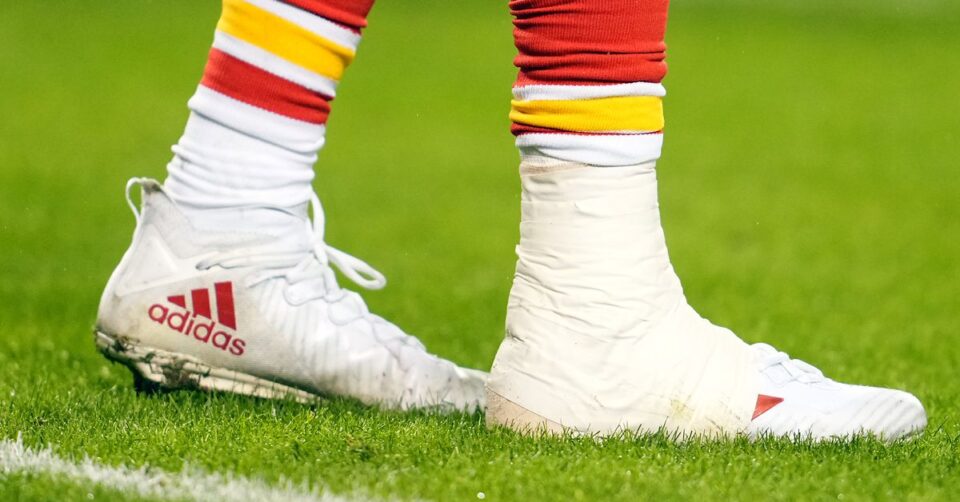 The Kansas City Chiefs advanced to their fifth-straight AFC Championship Game on Saturday, dispatching the Jacksonville Jaguars by a final score of 27-20.

However, they received quite the injury scare in the process.

Quarterback Patrick Mahomes suffered a leg injury in the first half of the game, and did not return to the contest until after halftime. Mahomes initially stayed in the game, but was visibly hampered by the injury, struggling to even execute handoffs in the backfield. The QB was then sent to the locker room, and Chad Henne replaced him for the rest of the first half.

With the Chiefs returning to the practice field on Wednesday, Kansas City head coach Andy Reid met with the media and provided an update on the QB. According to Reid, Mahomes was a participant in the team’s morning walkthrough, and is will practice on Wednesday afternoon:

Chiefs’ HC Andy Reid told reporters that Patrick Mahomes will practice today. “He did the walkthrough this morning and he’ll practice this afternoon,” Reid said.

Mahomes himself provided an update, indicating that he has been consistently receiving treatment since Saturday:

Patrick Mahomes wants to push it this week each day, make sure he doesn’t aggravate it, but wants to keep testing it. He’s been getting treatment consistently since Saturday night. He hasn’t been home much expect to really sleep.

He also talked about the similarities — and differences — between this injury and his previous high ankle sprain, as well as diving into quarterback mechanics:

It’s very similar, just a different ankle. Especially when you’re playing the quarterback position, you’re playing and throwing off different stuff. So, the last one, it was the leg that I landed on so I had to find a way to throw where I could land and keep it in the right spot, and this time I’ll find ways to be able to push off and be able to still make throws the right way. Definitely similar in a sense but obviously different limitations and stuff that I have to work through.

Pete Sweeney of Arrowhead Pride captured this footage of Mahomes during the media portion of Wednesday’s practice:

Reid addressed the media on Monday, and indicated that the high ankle sprain Mahomes suffered on Saturday is not as severe as the one he experienced back in 2019. Reid also noted that Mahomes has never played without practicing, opening the door to Mahomes playing this week without seeing the practice field:

Andy Reid said this high ankle sprain is not as bad as the one in 2019. He’s getting treatment and they’ll take it day by day. Reid said Mahomes is planning to play. He’s never played without practicing, but it appears that hasn’t been ruled out if staying off it ends up the plan

In an update Sunday morning, Adam Schefter of ESPN reported that Mahomes underwent an MRI of his ankle, which confirmed earlier reporting that the quarterback suffered a high ankle sprain. According to Schefter, Mahomes “plans to play” next weekend in the AFC Championship Game.

The injury came on this hit from Jacksonville pass rusher Arden Key:

Mahomes returned to the game for the second half, and threw a touchdown while using only one leg, and helped the Chiefs close out their victory over the Jaguars.

Ian Rapoport of the NFL Network reported on Saturday night that x-rays taken of Mahomes’ right leg were negative, but the quarterback likely suffered a high ankle sprain.

After the victory, Reid praised his quarterback’s toughness:

“He’s a tough kid. So, he wanted to be in there. He wanted to be competing. It’s a tribute to him and his competitiveness. However, you got to make sure he’s physically OK where he can protect himself. If he can’t then he can’t play, and we have to go to the next guy. But he’s a tough nut. I tell you, he’s competitive. He’s very, very competitive.”

The QB spoke with Melissa Stark after the game as well:

“I did want to go and they kind of gave me the ultimatum of I wasn’t going back in unless I went in [to be examined]. They’re trying to take care of me, and we’ve got a lot of great people here. It will take a lot to keep me out of a football game.”

Mahomes also spoke after the game about the injury, making the point that his experience, and ability, in making off-platform throws likely helped him after the injury:

Patrick Mahomes on playing through his ankle injury:

Given what both the quarterback and his head coach said after the game, it is almost impossible to think that Mahomes will not be out there for the the AFC Championship Game. The bigger story to monitor, however, will be how the injury impacts Mahomes next week, and beyond. The QB suffered a minor high ankle sprain back in 2019 and did not miss any time, but other quarterbacks who were dealt this injury have not been as lucky.

How Mahomes progresses, and how functional he is next weekend, will be a huge story over the coming days.

This post will be updated as further information on Mahomes is provided.